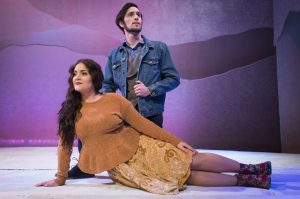 A production like “Songs for a New World” leaves a lot open for creative interpretation.

At its core, “Songs for a New World” is simply a collection of songs, one right after the other about the one moment that could, or has, changed the life of the person singing.

As such, it’s up to the cast and crew to make the show, well, interesting.

By taking an avant-garde approach to the musical, director Jake Schaefer, the cast and crew made Spokane Civic Theatre’s production of the Jason Robert Brown piece just that.

Set in front of a simple backdrop of flowy white fabric, the cast – Marlee Andrews, Christina Coty, Melody Deatherage, Jameson Elton, Jace Fogleman and Jonah Taylor – made a big impact as soon as they stepped onstage thanks to Schaefer’s decision to dress each actor in their own color rather than all black, as is common with this show.

Since each actor portrayed multiple characters, it was up to them – not a dramatic costume change, save for the removal or addition of a hat and/or jacket – to set each character apart.

After the full company beautifully opened the show with “The New World,” Fogleman’s Sam Smith-esque voice led the rest of the cast on “On the Deck of a Spanish Sailing Ship, 1492” and, near the end of the show, “Flying Home.”

Deatherage easily showed her range, playing a woman making a drastic move to get the attention of her neglectful husband (“Just One Step”) and two mothers at various stages in their lives – one an expectant mother (“Christmas Lullaby”) and the other a woman whose husband and son are fighting in the Revolutionary War (“Flagmaker, 1775”).

With her crystal-clear voice, Andrews shined in her solo song, “I’m Not Afraid of Anything” and as a pair with Taylor in “The World Was Dancing” and “I’d Give It All For You.”

Coty too showed her range, passionately singing both “Stars and the Moon,” perhaps Brown’s best-known song, and the hilarious “Surabaya-Santa” in which she portrayed a scornful Mrs. Claus.

Taylor made a great first impression in “The River Won’t Flow,” co-starring Elton, and his strong voice filled the stage in his solo song “She Cries” and the aforementioned duets with Andrews.

The youngest member of the cast at 15, Elton is a star in the making. His impressive vocal range elicited cheers from the crowd during “The River Won’t Flow,” “The Steam Train,” which featured the rest of the cast, and “King of the World.”

The conviction with which he performed “King of the World,” a song about a man in some type of literal or metaphorical prison demanding to be freed, was especially impressive given his youth.