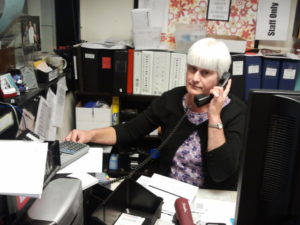 Box Office Coordinator Rebecca answers the phone and she really is happy….we promise.

As many of you have probably found out by now, Spokane Civic Theatre is doing things differently for the 2012-2013 Season to Inspire. Mainly, tickets for the whole season go on sale on one date, instead of a month before the opening of each production. Tickets for Season Subscriber and Donor Members have been open for months, but the general public couldn’t get tickets until yesterday, August 15th. What a busy day it was, too!

Box Office Coordinator Rebecca and her assistant, Deanna, prepared by bringing on extra help for the morning, knowing that people had been asking when tickets would go on sale for several of the 2012-2013 Season to Inspire productions. However, no one knew just how many calls to expect. Did enough people know about the date to make a big difference? Big changes always make such things hard to predict, but that’s half the fun and makes it into an adventure!

The 2012-2013 Season to Inspire holds many good and well-known productions as well as some that are new. On the Main Stage, the productions include The Producers, White Christmas, Escanaba in Love, The Drowsy Chaperone, Treasure Island, and Grease. The studio will house A Closer Walk with Patsy Cline, Next to Normal, On Golden Pond and Dixie Swim Club. Anyone involved with the theatre two years ago would know that White Christmas was the most popular show in recent years. The show was completely sold out by the opening Saturday of the production. 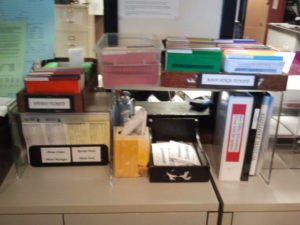 Will Call Boxes full of tickets with others waiting to be filed at Spokane Civic Theatre’s Box Office.

So, the box officers prepared for an onslaught. There were quite a lot of calls throughout the day, including to group sales that were each over $1,000! All in all, the day was a huge success, but not overwhelming. Rebecca remarked that it was busy enough that the two credit card machines couldn’t keep up, but Deanna added that there was enough pause between phone calls to keep organized and file tickets into the will call without scampering around like a crazy person.

Part of the hope when making this change was to help spread phone calls out so that the crazy days would be less crazy and the slow days less slow. It’s too soon to tell, but it looks like it might be working at this point!

For more information about this season and any other news, please visit Spokane Civic Theatre’s Website and twitter page! Tickets are available at 509-325-2507, at 1020 N. Howard St. or online at TicketsWest.com. We hope to hear from you soon and see you at the theatre!