PREVIEW: Spokane Civic Theatre’s ‘The Flick’ celebrates the depth behind the mundane 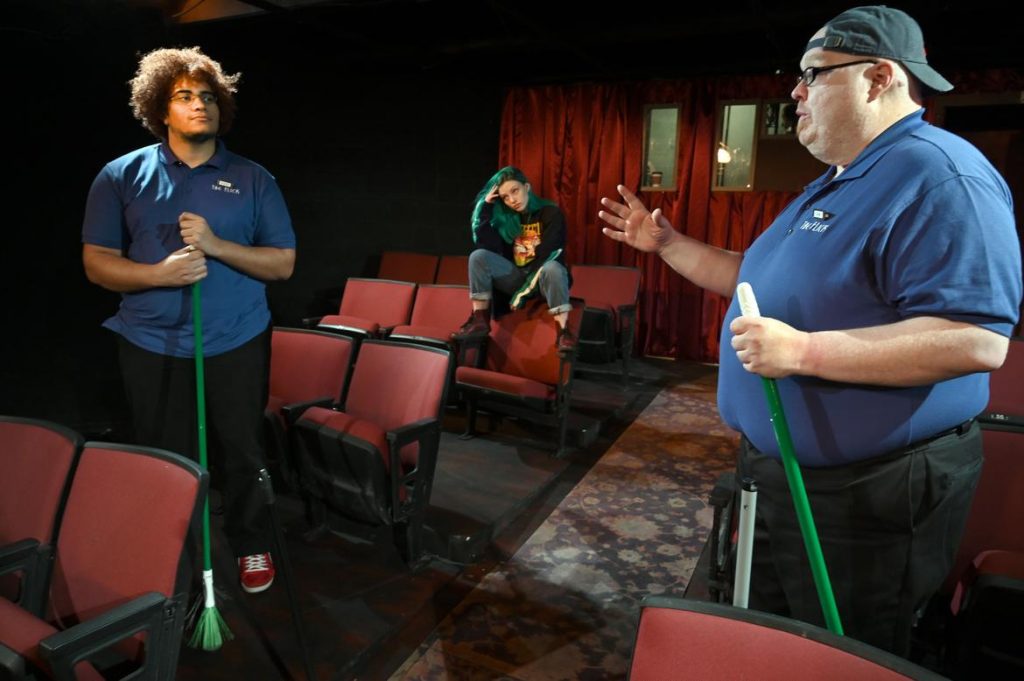 Going to see a movie is a bit of a spectacle in and of itself.

After purchasing your tickets, there’s the matter of concessions. Do you go for the classic popcorn and soda combo? The nachos? The licorice or M&Ms?

Once that’s settled, it’s time to find the perfect seat. Are you a middle-of-the-row, middle-of-the-theater kind of person? Do you like to sit near the end of the row so you can more easily make it to the concession stand for a refill?

No matter where you sit, when the lights go down, all eyes are on the screen for 90 minutes of escapism, be it a film full of explosions and car chases, a storybook romance or a laugh-until-you-cry comedy.

Some theater patrons decide to remain in their seat for the entirety of the credits, but when the lights come up and employees come in wielding brooms and dustpans, it’s back to reality.

But for the characters in Annie Baker’s “The Flick,” three misfits ushers – Sam (Will Gilman), Avery (Marvin Hughes) and Rose (Aubree Peterson) – in a movie theater that’s seen better days, these moments in between films are when the drama actually happens

“The Flick,” which won the Pulitzer Prize for Drama in 2014, also features Johnny Monday as Skylar.

A big fan of Baker’s, Start had workshopped a couple scenes from “The Flick” to potentially be included in a showcase while in graduate school in New Jersey, but the scenes didn’t end up making it in.

So when Civic’s creative director Jake Schaefer, who had approached Start about possibly directing a show this season, announced the 2018-19 season, Start applied for four productions, with “The Flick” being his top choice.

Critics of the show say not much happens in “The Flick,” save for lots of sweeping and seemingly mundane conversations, but Start says that’s exactly the point.

“I think (Baker) is writing in a way that a lot of writers aren’t where she’s really finding a way to create plays where the events happen in between the lines,” he said. “She’s finding a way to write dialogue that is so rich and can have so much more meaning than actually what’s on the page.”

As such, Start chose not to trim the three-hour play, saying “I would never feign to be smarter than she is.”

“The Flick” presents an interesting challenge, set-wise. With the action taking place in the rows of a theater, where do you put the audience?

While some directors may take a bit of creative freedom, Start decided to stay true to the stage directions in Baker’s script.

“What I’ve gleaned for her stage directions is that the is audience is the screen of the movie theater and that there’s a tension between that,” he said. “Two houses looking at each other.”

Throughout the play, the three leads discuss mental health, race, sexuality and more, all while sweeping popcorn, without regard to who may be listening. After all, they’re simply chatting with co-workers.

As such, their dialogue is sprinkled with language some may find crude.

But Start doesn’t think that should deter anyone from seeing the show.

Those sometimes blunt conversations, Start surmises, are the result of Baker’s “exploration of how people experience otherness, especially in the workplace” where people who wouldn’t normally interact must come together.

He also thinks they go back to her writing, which makes the conversations between Sam, Avery and Rose more weighty than they may seem.

“She really is exploring subtext and she’s using pause and silence to further the action of the play,” he said. “We all do that. We all spend so much time not knowing what to do next or what to say next or, in the case of how we’ve interpreted it for our purposes, silence, not saying what we want to say because it would be too hurtful or it doesn’t fit into socialized behavior.”