PREVIEW: Buddy the elf gets the musical treatment in “Elf,” opening this week at Spokane Civic Theatre 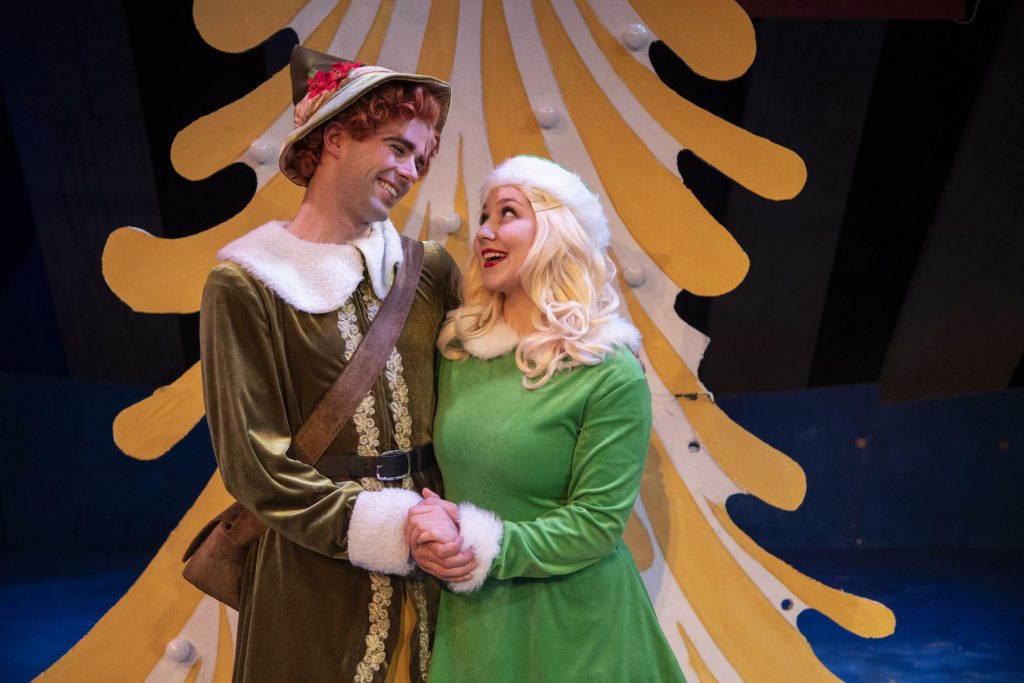 With the holiday season upon us, Spokane Civic Theatre is gearing up to present the Northwest premiere of “Elf,” a musical adaptation of 2003’s beloved Christmas film.

With music by Matthew Sklar, lyrics by Chad Beguelin and a book by Bob Martin and Thomas Meehan, the story begins with Buddy the elf’s (Seth Flanders) realization that he is in fact not an elf. Slightly shaken by the news, he goes to find Santa (Kim Berg) who explains Buddy’s origins. Several years before on Christmas Eve, the then recently orphaned Buddy had crawled into Santa’s bag of toys and stowed away to the North Pole. When Santa and the elves find the child they decide to raise him. Buddy grows up full of Christmas spirit, happily believing himself to be an elf, regardless of his less than elf-worthy toy making skills and significant height difference.

Santa explains that Buddy’s mother died shortly after his birth before she could tell his father she had ever even been pregnant. His father, Walter Hobbs (David Hardie) is still living in New York with his new family. Horrified to learn that his father is on the naughty list and that his half brother (Aiden Else) doesn’t even believe in Santa, Buddy sets off for New York determined to bring the spirit of Christmas back into their lives.

Like most film-to-stage play adaptations, “Elf” shares the film’s theme but departs from the plot in a few areas, taking a number of liberties with character changes and settings.

“Hopefully people will come and see it and give our version of ‘Elf’ a try,” show director Kathy Doyle-Lipe said. “I think that they will be very pleasantly surprised. There are some really cool things that happen on that stage that don’t happen often and a few of them that have never happened before.”

The added musical numbers, festive costumes and live performances give the musical its own sort of magic and make up for any differences between the stage play and film.

“One of the benefits is that you’re right there in person, watching a human being, who has become Buddy the elf, go through these adventures,” Doyle-Lipe said. “I think it’s a fun thing to add the musical element and the dance; it just heightens the feel of the whole production. It’s such a fun Christmas story and, as I’m learning, such a part of so many families’ traditions to watch the movie.”

The story of “Elf” seems especially suited to musical adaptation with its whimsical settings and themes.

“It’s already got the elements – a little bit of magic and lots of fun, larger than life characters that are always fun to watch on stage where you could almost reach out and touch them instead of just seeing them up on a flat screen,” Doyle-Lipe said.

While the story’s tone remains appropriate for stage adaptation there were still difficulties along the way, the great majority of which revolve around the restrictions that come with building sets and scene transitions.

“The staging has been tricky. That’s the real disadvantage of going from a movie to a play,” Doyle-Lipe said.

In the movie, Buddy travels all the way from the North Pole to New York through a wide range of climates and settings all in the span of a few minutes. But in a stage play where each of those settings would have to be stored and moved around backstage during shows in the same amount of time, a similar kind of montage becomes a herculean task.

“Those transitions are live and take living time rather than ‘cut the camera’ and starting over again,” Doyle-Lipe said. “That’s probably our biggest challenge, trying to move around to all these different locations and make it realistic. We just can’t have him going through all those different places, it’s just not possible.”

Losing a few settings, however, does very little to dampen the mood and message of this cheerful, family-friendly musical.

“The message of the musical is that love and hope and being non-judgmental conquers all,” Doyle-Lipe said. “They all end up accepting Buddy. Whether it’s Christmas or Hanukkah or whatever else, it doesn’t matter. Opening up and thinking about the wonders that have happened, not only now but also in the past, your wonderful memories, hanging on to those traditions and keeping the spirit alive is kind of what makes that holiday – if we can just hang on to that spirit.”

Preview by Stephanie Hammett of The Spokesman-Review