‘Murder on the Orient Express’ arrives at Spokane Civic Theatre 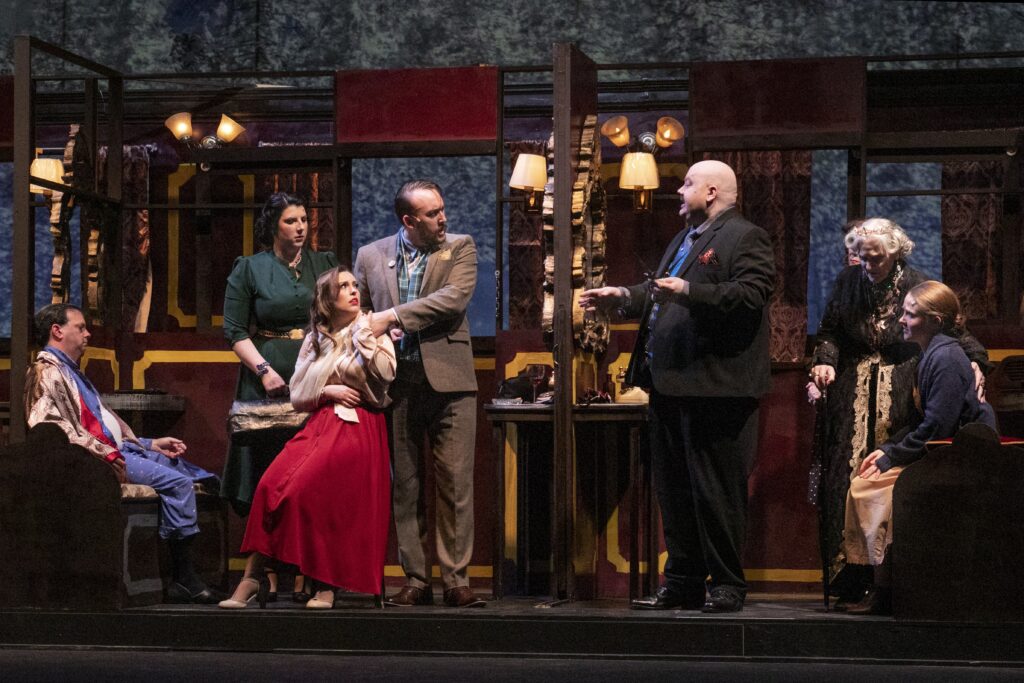 Directing at Spokane Civic Theatre again for the first time since March 2019, Heather McHenry-Kroetch is glad to be returning with the cast of “Murder on the Orient Express.”

“I’m excited to do it,” she said. Especially now, she explained, you never feel like you’re dragging yourself to rehearsal because you know how lucky you are to go.

Based on the Agatha Christie novel of the same name, Ken Ludwig’s stage adaption of “Murder on the Orient Express” opens this weekend.

Caught in a snowstorm, the Orient Express – unusually crowded for the time of year – slides to an abrupt halt just minutes past midnight. All seems to be going well considering.

As the train wakes, one door remains locked. And no one is answering. Inside, an American business tycoon lies dead with a dozen stab wounds. Luckily, detective Hercule Poirot (Bryce Clifton) happens to be on hand.

Portraying the gentleman detective, Clifton last appeared onstage at the Civic in “The Play That Goes Wrong.” A lifelong murder mystery fan, Clifton jumped at the chance to play the iconic Poirot.

“When the pandemic hit, my dad and I went through and watched all of the BBC’s Agatha Christie series,” he said. “And it was a long-running program – 15 seasons or something like that.

“So, I’m coming into this more influenced by David Suchet’s performance than the more recent Kenneth Branagh movies that a lot of people will probably be more immediately familiar with.”

However, he said, with such an iconic portrayal on film, it’s always a challenge to create your own. He wanted to make sure that his Poirot was familiar, but also find a way of embodying all of Poirot’s idiosyncrasies without making him a complete impersonation of Suchet.

“He is very peculiar,” Clifton said. “That archetype of the independent detective who comes in, sees everything, knows everything. He’s incredibly smart.

“But what’s delightful about Poirot is that he has these quirks. He’s well-groomed and vain, confident in his personality and the person he is. But it’s not with a sense of arrogance. There’s still a humility to him, a politeness.”

Mastering the French – I mean – Belgian accent was much easier than learning the lines.

“If you had a stopwatch and started and stopped it for the amount of time that I’m off stage, that maybe totals four minutes,” he said. “Poirot is in almost every scene. The play has a lot of dialogue, and in the 90 pages of script, I think I have words on 82 of them. So, yeah, it’s been a monster.”

Luckily, Clifton said, the rest of the cast was always happy to run lines.

“I’ve felt incredibly supported by my cast – everybody has been phenomenal to work with,” he said. “Any any time that people can spare a minute, they’re happy to jump up and help people out.”

Shifting from “The Play That Goes Wrong,” a farce from start to finish, Clifton has enjoyed taking a ride on the more serious side of the mystery world.

“It was so fun to be part of that show (and) … part of my excitement in doing this show is getting to show the people of Spokane, ‘OK, I just did this completely bonkers comedy, and now I’m gonna go do this for real,’” he said. “As an actor, that’s been a treat.”

Staged in the Margot and Robert Ogden Main Stage at Spokane Civic Theatre, 1020 N. Howard St., shows start at 7:30 p.m. Thursdays-Saturdays and 2 p.m. Sundays through June 19. Admission: $35 for adults, $30 for seniors and military and $10 for students.