Morgan Keene has big dreams: ‘Believe it’s yours, and it will happen’ 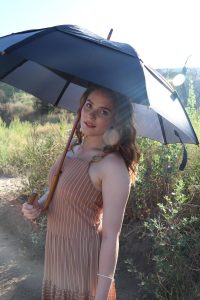 Morgan Keene is about as far away as possible from Spokane for someone remaining in the U.S. The singer-actress, who cut her teeth as a teen on the Spokane theater scene, is 2,794 miles away in Orlando.

“I miss how beautiful it was (in Spokane),” said Keene, a former Mead High School student who starred in Spokane Civic Theatre’s sold-out run of “Grease” in 2013. “The trees, the perfect four seasons, but most of all Greenbluff!”

The theme park capital of the world is perpetually balmy, suffers from gridlock and is full of transients. Keene, 23, is likely to be moving along when her next break arrives. But for now, Keene is in the middle of Florida since she’s part of the Disney vocal group DCappella.

“It’s much different here than in Spokane,” Keene said from Orlando. “Spokane has much more of a small-town vibe than anywhere I’ve ever lived.”

Keene, who was born in Atlanta, left Spokane during her sophomore year of high school for New York to follow her dream.

“I went to train to be on Broadway and do musical theater for a living,” Keene said. “I went to take dance lessons, voice lessons, do acting workshops and get used to New York City.”

Another big city is within sight of Keene. “My goal is to be living in Los Angeles within the next few years to continue pursuing music,” Keene said.

However, Keene will remain in Orlando when she’s not on tour with DCappella, which has an album to its credit and a pair of tours of North American and dates in Japan.

“Both (tours) were fantastic, and we have been getting a lot of work done since, like recording new tracks in the studio, doing photo shoots and shooting new music videos,” Keene said.

“The coronavirus came out of nowhere and was definitely not something that any of us could have prepared for, but even during this time, we are working on lots of new and exciting things. So much is in the works, and we are hopeful that we can share those things soon.”

Thanks to arranger Deke Sharon, DCappella revamps Disney hits such as “You’ll Be in My Heart” from “Tarzan,” “When She Loved Me” from “Toy Story 2” and “Let It Go/Do You Want to Build a Snowman” from “Frozen.”

“I have always been a fan of Disney music,” Keene said. “I grew up watching all of the classic films, like most people. A cappella was always something that I was curious about but had no experience with before being cast to be part of DCappella. Being in this group has really helped me grow as a musician and challenged me in more ways than I could have ever imagined.”

The seven-piece act also offers renditions of pop tunes such as Fall Out Boys’ “Immortal,” which won AVA’s Best Rock Video Award in 2019. Keene tips her hat to Sharon, who is adept at finding ways to reinvent songs in an innovative manner.

“Deke is just one of the most energetic, smart and creative people I know,” Keene said. “He makes our arrangements and then hands us the reigns. We have a lot of say when it comes to what we want to do with each song. It’s really amazing to work with someone who is so good at what he does but also is so open to collaborating with us.”

Keene only returns to Spokane when she’s on tour since her parents moved to Alabama in 2016 after she landed the lead in the North American tour of “Newsies.”

“ ‘Newsies’ was such an experience for me,” Keene said. “It was the first time out of my parents’ house, and I was pretty much just thrown into the world with not much to grab on to. Musical theater will always have a big piece of my heart.”

It all started for Keene in Spokane, and she looks back fondly.

“Christian Youth Theater was what encouraged me to go into musical theater,” Keene said.

Two of Keene’s favorites from her early days were performances in the 2013 Civic Theatre productions of “Grease” and “Next to Normal.”

“I’d always dreamt of playing Sandy,” Keene said. “ ‘Grease’ is one of my favorite movies to this day.

“ ‘Next to Normal’ was hard for me for a few different reasons. I was going through a lot personally at the time. But the content of the show was also difficult for me. I grew a lot musically and emotionally.”

Keene will continue to add to her resume with DCappella.

“We will definitely be hitting the studio soon,” Keene said. “Upcoming international tours are in the works, as well but I can’t spill too much!

“Stay tuned through our social media (@dcappellamusic) for updates on upcoming tours and new music releases.”

Ever since Keene was a tyke, she has dreamed big. When asked about what’s down the line, it’s evident that Keene has set the bar high. Keene hopes to showcase her songs as a solo artist courtesy of an arena tour, and she would like to craft her own tunes.

“I’ve been getting into songwriting over the past couple of years, and all of my ideas are just starting to finally come out,” Keene said. “Some people say that goal is pretty out there, but I believe in working hard and manifesting that stuff. Believe it’s yours, and it will happen.”

Article by Ed Condran of the Spokesman-Review