Meet the Soul of Second Samuel

The People of Second Samuel

What makes Second Samuel work is plain old southern soul. It’s set in a time when life is slower and it’s set in the deep south where life is even slower. Everyone knows everyone and it’s everyone’s business to know your business. Eccentric characters that embody the small town style of living.  As Chris Taylor (you’ll read more about him in a minute) says, Second Samuel reminds us that “in all the hustle and bustle of everyday life, and in our desire to multitask and be as productive and busy as possible, sometimes it’s a good idea to slow things down and put all of our attention and focus into one task, one moment, or one person. We should take the time to really listen to people. We should pick one task and give it our best effort. If we can do that, everything else will take care of itself.” And that is the soul of Second Samuel.

Opening this weekend at Spokane Civic Theatre on the Firth Chew Stage (entrance off of Dean), Pamela Parker’s Second Samuel plays from October 25th through November 24. Tickets are only $22 and can be purchased through Civic’s website, by phone: call 509.325.2507 to reach the box office or in person at the box office. 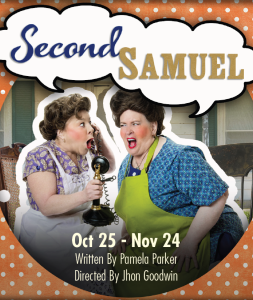 June is the town undertaker. As Second Samuel is a very small town, June takes great care in preparing bodies for their last respite. He’s quiet and introverted and the living make him a little nervous. June never leaves his funeral parlor or home – but when we first meet him, he has entered the town’s local brewery for a much needed adult beverage. Something VERY unexpected happened when June was preparing one of his bodies. What, do you ask? You’ll have to come to the show and see!

He is an ignorant man whose false security hides his own fear. His hatred of everything different than him comes out of his own self-loathing.

My character is the guy next door. Ready to have a beer with you and laugh about the day’s events. But his simple views of life are challenged in this play. I’ve known a few people with these characteristics. I try to pull a little bit from each of them.

B Flat is the soul of Second Samuel. He is this sweet kid who’s lived in this small town his whole life. He loves everyone he meets, and thinks this tiny town in Georgia is the greatest place on Earth. The most important thing so far has been B Flat’s physicality and how he carries himself. He walks through this town he loves so much with a clumsy grace I wish I had. He also smiles so much that by the end of a performance my cheeks hurt!

She owns a beauty salon. She’s bossy, gossipy, likes being in charge and talking. Tries to be in control of situations until the town secret comes to light and she can’t control the situation.

Marsella is an opinionated, strong-willed farm woman who likes to think she can control her lazy, hard-drinking husband Mansel. Fiercely protective of B Flat, she joyfully butts heads with biased bully Jimmy Deeanne at every opportunity.

Ruby was born and raised in Second Samuel. Omaha hired her right after high school, so working at the hair salon is the only job she’s ever had. She’s sweet and kind, but never sticks up for herself, which drives her crazy. Unbeknownst to her friends, Ruby has a fiery side that she keeps well buried, that is, until the right opportunity presents itself.

Jimmy Deeanne is a spoiled Southern debutante. She’s always gotten what she wanted, and has never been told no. She’s married to the town pastor, Bobby, which further elevates her status in Second Samuel. However, Jimmy does have a human side she keeps hidden. She often feels pressured to live up to the “perfect” ideal she’s created for herself. Her family puts a lot of pressure on her to be the best, and this stresses her out. She covers that anxiety with a harsh attitude.

June Cline:It’s a reminder of a simpler time, when we were more focused on taking care of each other, and that wasn’t all bad

Mansel Dean: This play is worth seeing because it challenges our ability to see through outward appearance and love people for who they are.

B Flat: People should come expecting to be surprised. It’s a funny play, but it’s also got a tender heart that might catch people off guard.

Marsella Dean: Who wouldn’t want to hang out in Second Samuel? Seriously, though, if this group of quirky town folk can learn to accept differences in each other we can all learn something from them.

Jimmy Deeanne: Second Samuel is a small show with a big heart. It has been wonderful to see this cast of both seasoned professionals and new-comers create something so rich.