Last weekend, Spokane Civic Theatre performed Songs For a New World composed by Jason Robert Brown. Civic and Jason Robert Brown offered a Master Class which was a three hour intensive musical theatre session for a group of eight actor/singers. All of the master class participants were also featured in the in concert over the weekend. For the class, Mr. Brown had each of the Songs For a New World participants prepare two musical theatre pieces in advance to be accompanied by music director, Michael Saccomanno.

Theatre patrons, students, parents, etc. were invited to audit the master class with an opportunity to learn more about what goes in to threatre, singing, and acting. We had approximately 30 patrons who supported and participated at that level. Yvonne AK Johnson noted “We learn from both actively participating and from observing others practicing their craft. Everyone went away from the experience with pages of notes!” 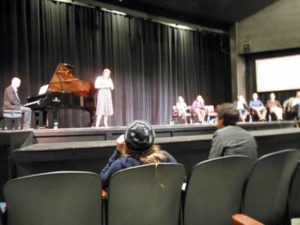 While not our greatest picture, one get’s the feel for the of the Master Class with Jason Robert Brown

Opportunities like a Master Class with Jason Robert Brown

It’s moments like this, opportunities to have a master class to learn more about your trade, your passion for acting and singing, that make community theatre so important. Spokane Civic Theatre is more than a musical, it’s about providing our community with chances to learn and grow and expand horizons. We are grateful for this opportunity and for the support from our community that allowed us to bring Jason Robert Brown to Spokane.

To find out more about Spokane Civic Theatre, check out Civic News, stay up to date with cast and crew on our Facebook Page and keep an eye on Pinterest for some pinnable images of all things theatre! Up next White Christmas directed by Yvonne AK Johnson and upcoming productions for the Season to Inspire include Escanaba in Love, Next to Normal, The Drowsy Chaperone,  On Golden Pond, Treasure Island, The Dixie Swim Club and Grease.