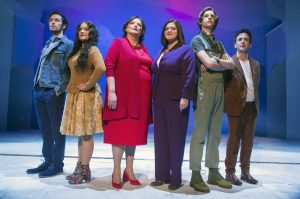 When he was 10 years old, Jake Schaefer starred as the Munchkin Mayor in a Spokane Civic Theatre production of “The Wizard of Oz” directed by Kathy Doyle-Lipe.

A summer or two before that, he participated in a camp directed and produced by Jean Hardie, a staple of local theater.

After several years away, Schaefer can hardly contain his excitement about returning to the place where he began his creative life, this time as creative consultant.

“I’m so crazy about this place and these people, from the staff to the performers,” he said. “My single position is on this place winning and everyone that comes even near it feeling that spirit.”

Schaefer’s first time in the Civic director’s chair since returning to the theater in December is a production of Jason Robert Brown’s “Songs for a New World.”

In “Songs for a New World,” the audience meets a handful of characters – the captain of a ship, a woman making a drastic move to get the attention of her neglectful husband, an expectant mother, a man in love, a teenager who dreams about becoming a basketball star, reunited lovers, a soldier – who all have one thing in common: One moment could, or has, change their lives forever.

An atypical musical, “Songs for a New World” trades a plot peppered with songs for a collection of songs, one right after the other, that tell a series of stories with a connecting theme.

The musical opens Friday and runs through March 4.

“The music is real varied in the sense that there’s ballads and there’s duets and there’s uptempo group numbers,” Schaefer said. “The songs are so dynamic. It provides such a vehicle for the performers.”

Schaefer said this musical is sometimes performed with actors wearing all black so audiences can more easily tell, with the addition of a scarf or a hat, when the actor transitions from one character to another.

But Schaefer made the artistic choice to go in the opposite direction, dressing each actor in their own color: Coty is purple, Elton is green, Deatherage is red, Andrews is yellow amber, Fogleman is brown and Taylor is blue.

“Every look is complete and succinct at the same time but then they were built to, when everyone is on stage, look really complimentary,” he said. “Visually that through-line is even more provided so in the sense that there is real style in this show.”

In order to update this production to work with six actors instead of its typical four, Schaefer reunited with music director Henry McNulty, who also participated in that summer camp as a child. McNulty rearranged some of the vocals and wrote new harmonies.

“He’s like a beam of light and is super sophisticated,” Schaefer said.

“There is a force of nature in each of them in different ways, and as a group, it’s crazy,” he said. “The group numbers, just the harmonies, you would think it’s something we’ve rehearsed for six months.”