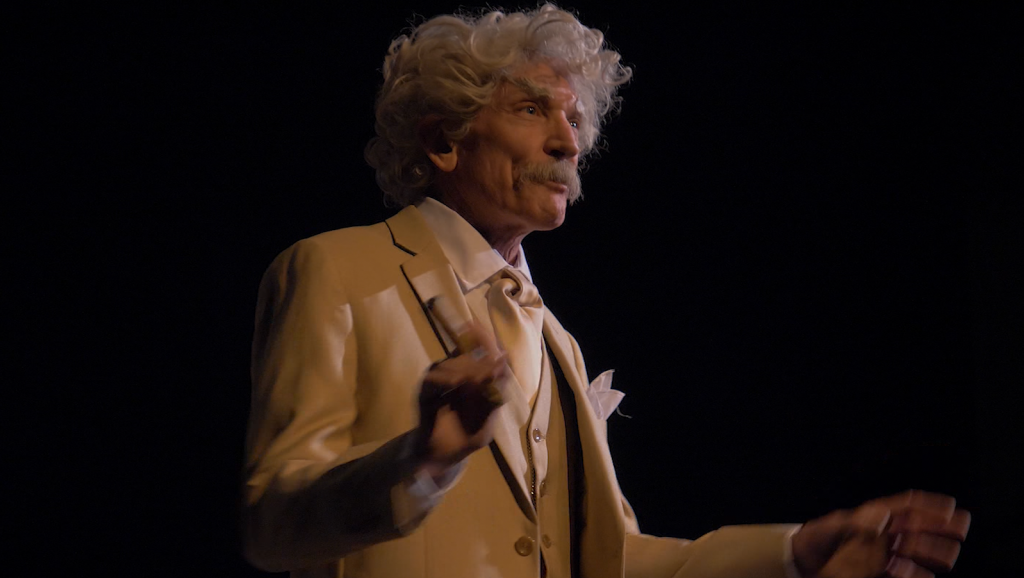 The next in Spokane Civic Theatre’s “Civic Presents” lineup, actor Patrick Treadway’s “Mark Twain” is a one-man, staged retelling of the eponymous writer’s life. Starring and created by Treadway, the show incorporates excerpts of Twain’s writing as his life story unfolds onstage.

Filmed over the course of two performances on the main stage at the Civic Theatre, the hourlong show will begin streaming at 7:30 p.m. Friday. To view the performance, visit spokanecivictheatre.com/presents. The show is free to the public, but audience members can “donate a ticket” at a price of their choice.

Treadway inherited a fondness for Twain from his father. Early on, he enjoyed reading and hearing stories like “The Adventures of Huckleberry Finn,” “The Jumping Frog” and a handful of other titles. He even played the title role in Civic Theatre’s 1991 production of “Huckleberry Finn” and Spokane Theatrical Group’s production in 1999, both led by Civic Theatre resident director Troy Nickerson.

But the overwhelming desire to dive head first into Twain wouldn’t come until much later when, in 2019, the casting director for the American Queen Steamboat Co. pitched the idea of creating a one-man show for Treadway to perform onboard during trips up and down the Mississippi River.

In addition to a staged retelling of Twain’s life, the performance lineup would include matinee shows during which Treadway would be expected to answer questions from the audience in character. He jumped at the chance, immediately diving into studying everything he could about the man.

“Naturally, I said yes,” Treadway said. That being said, “the ‘Q&A Matinee’ was well beyond my improvisation skills and frankly terrified me.”

But his studies quickly led him to develop “a real appreciation for the man and his writings,” one that inspired him to follow in the spirit of Hal Holbrook, famous for his portrayal of Twain in his TV series “Mark Twain Tonight!” among other roles.

“I kind of thought this would be just another enjoyable job,” Treadway said. “But I can see why the great Hal Holbrook invested so much of his life into portraying this fascinating man.”

In the TV series, Holbrook wears a white suit throughout, which, although historically inaccurate, continues to stick in people’s minds, Treadway explained. In fact, Twain favored a dark tuxedo for most of his life. He wouldn’t switch until 1906 when, at 70, he chose the eye-catching white to garner public attention during his testimony before a congressional committee on copyright laws, Treadway explained.

“The steamboat company insisted I wear a white suit,” Treadway said. But, “Spokane Civic Theatre graciously allowed me to not follow Holbrook’s costuming or portrayal decisions.”

Treadway stuck with the steamboat shows until the beginning of the pandemic forced the crew to postpone the rest of his 2020 contract.

With his head full of Twain trivia, Treadway reached out to Jake Schaefer, creative director at Spokane Civic Theatre, to pitch the show. He knew he had just enough material to craft a piece for “Civic Presents.”

Knowing Treadway’s talent from past collaborations at Civic Theatre, Schaefer quickly agreed, asking Treadway to add an extra 15 minutes to the show for its “Civic Presents” debut.

Trained at the American Conservatory Theater in San Francisco, Treadway is an actor, puppeteer and visual artist. He is an active member of Spokane’s theatrical community and has performed many leading roles over the years, including Huckleberry Finn, Captain Hook, Bing Crosby and John Barrymore at Actors’ Repertory Theatre, American Queen Steamboat Co., Coeur d’Alene Summer Theatre, Spokane Civic Theatre and – as a resident artist – Spokane Interplayers Ensemble.

“He’s an artist through and through … exploring the world (as) a creative professional,” Schaefer said.

The project hasn’t been all easy, Treadway said, but the rewards have far outweighed the work.

“I am so grateful, at 61, to be asked to learn … let alone learn so much about an American icon in a short amount of time,” Treadway said. “Being told after a show that audience members felt they were really in the presence of this historical figure is incredibly gratifying.

“Every living history actor wants to hear that, I think.”

Article by Stephanie Hammett of The Spokesman-Review