Civic Gets a New Sound Booth

When it Comes to Theatre Sound is King

Chris Wooley, who runs sound on many of Civic’s Main Stage musicals, is overjoyed that Civic gets a new sound booth. We’re certain you have been to a show on the Main Stage at Spokane Civic Theatre where the band is louder than the on stage cast. So is the life of a theatre. Sometimes. But not always. Why? It can be hard for a sound tech to hear what the audience hears when they are literally stuck behind a wall in a booth behind and above the audience. What they hear must pass through a single grouping of windows. It’s not very efficient and the audience can tell, can’t we? Well, that’s about to change! 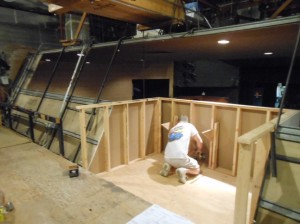 Tim Flegel from Flegel Building Contractors, Inc. as he builds the new addition to Spokane Civic Theatre’s sound booth on the Main Stage.

As you can see from the pictures, the new booth is open and literally sits right above the audience. The sound tech can more accurately hear what the audience hears, therefore sound problems should disappear giving you, the audience, an even more enjoyable experience for all of those wonderful shows coming up in Spokane Civic Theatre’s 2012 – 2013 Season to Inspire.

Who is in charge of the venture?

The design for the new booth was done by Dan Griffith from ALSC Architects with the goal of bringing tech into the space where sound is produced for even more fine tuning. After receiving the plans, we hired Tim Flegel from Flegel Building Contractors, Inc. This isn’t the first job he’s done for us, either. The work in the lobby of the Studio Theatre and the pergola outside of the main entrance was his work as well. Of course, this new space would not be able to function as a sound booth without the electrical work of Merit Electric. 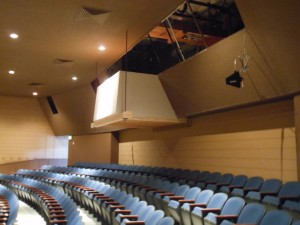 Acoustics and location of the new sound booth gives the sound tech a bird’s eye view and allows them to hear what the audience hears.

The 2012 – 2013 season opens at Civic with The Producers on September 21st. We’ll be having a celebratory Gala celebration and we hope you will be on hand to check out the new sound booth.