The Reviews are in! 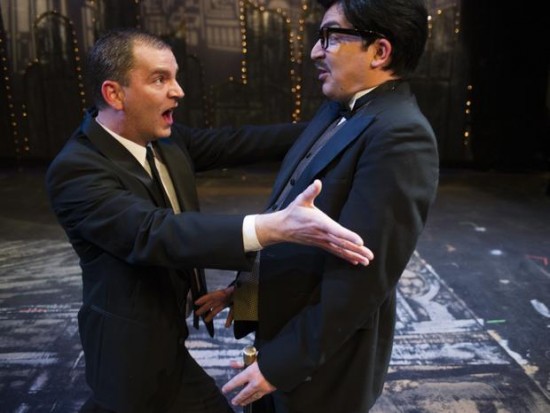 When it comes to screwball farce, a little exuberance can go a long way. And when it comes to “Crazy for You,” Ken Ludwig’s Tony Award-winning musical that opened at Spokane’s Civic Theatre on Friday, the energy of the performers can work wonders. In the wrong hands, the plot could easily be a creaky and tired affair, but in the able hands of director Kathie Doyle-Lipe and her talented cast and crew, “Crazy for You” is a lot of bubbly, old-fashioned fun.

The show is a throwback in more ways than one. Not only is its story as old as the hills, but so is the score, a collection of songs by George and Ira Gershwin that date as far back as the 1920s. The showbiz comedy follows Bobby Child (Mark Pleasant), the son of a wealthy New York City banker, who has stars in his eyes and dreams of a career on the stage. The problem is, he can’t get his foot in the door: The flamboyant Bulgarian theater owner Bela Zangler (Kelly Hauenstein) refuses to let Bobby audition.

Bobby’s personal life is as unfulfilled as his professional one: He’s henpecked by his disapproving mother (Georgia Spencer), who wants her son to get his head out of the clouds, and his fiancée Irene (Noel Morrison), whose feelings toward Bobby are not reciprocated. When he’s requested to travel to the other side of the country for business, Bobby jumps at the chance, and he’s sent to foreclose on a boarded-up theater in the sleepy mining town of Deadrock, Nev.

“Crazy for You” really jumps to life when its focus shifts to Deadrock, where all of the residents look on with wide-eyed, aw-shucks awe at the big city mystique of a guy like Bobby. The deserted theater is owned by the nostalgic Everett Baker (Ed Bryan), whose daughter, Polly (Tami Knoell), is the only woman still living in Deadrock. Bobby wanders into town, which is an hourlong walk from the train station, and immediately falls in love with Polly, who rebuffs his advances when she discovers the real reason for his visit to Deadrock.

Here’s when the complications of the story really start to develop thick and fast. Bobby decides to save the theater by orchestrating a benefit show with the Deadrock locals and Bela Zangler’s chorus girls. But Bobby does this all disguised as Zangler, and Polly finds herself slowly falling for this out-of-towner without realizing it’s Bobby beneath the wig and fake mustache. And all of this happens before Irene and the real Zangler show up.

You can probably guess where the story goes from there, but “Crazy for You” isn’t really about the plot – it’s about the comedic obstacles the characters have to hurdle. “Crazy for You” is, really, a showcase for the actors: There’s singing and dancing, sure, but the show really soars during its individual moments of sharp physical comedy that require timing as impeccable as any tap number. There are memorable and adeptly-performed comedic bits throughout: the Deadrock locals’ extravagant recreations of Western gunfights, a recurring joke involving a series of bottles sliding down a bar and a drunken faceoff between the two Zanglers that recalls the Marx brothers’ famous mirror routine.

The ensemble cast here is terrific, and their vitality sells the material. So many funny, colorful supporting characters linger on the fringes of the story, and most get a moment to steal the spotlight. But Pleasant and Knoell are the standouts here: He’s the breathless dreamer in over his head, and she’s the headstrong romantic, the emotional glue holding everything together.

And then there’s the Gershwins’ score, culled from several of their old Broadway shows, which features some of the greatest music of its era. From “I Got Rhythm” to “Stiff Upper Lip” to “Nice Work If You Can Get It,” the songs lend “Crazy for You” a sparkle and zest that’s hard to resist. It’s a familiar story, told well, and it proves to be a charming night at the theater.