Review: ‘The Play That Goes Wrong’ goes so right 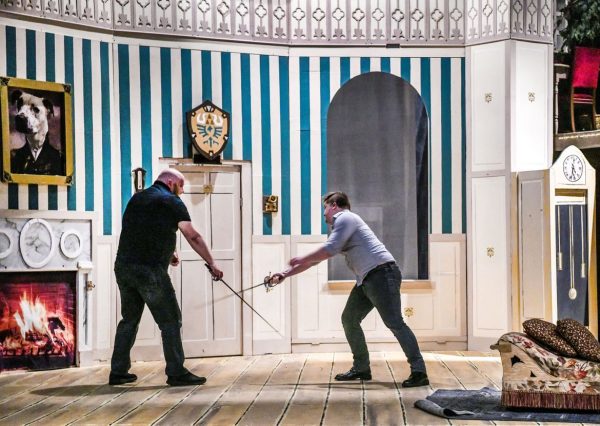 Off to the races before the lights have even dimmed, Spokane Civic Theatre’s “The Play That Goes Wrong” is hilarious, charming and absurd from start to finish.

Directed by Jean Hardie and written by Henry Lewis, Henry Shields and Jonathan Sayer, “The Play That Goes Wrong” follows a group of actors from the fictitious Cornley Polytechnic Drama Society as they attempt to mount a production of “The Murder at Haversham Manor.”

One technical catastrophe after the next tests the cast’s resolve until, finally – incredibly – they make it to the conclusion.

Within the first five minutes, the characters are already – quite literally – holding the show and the set together. The mantlepiece is down, the props are switched, the stage elevator is malfunctioning and, what’s that? – ah, yes, there’s a corpse in the lounge. But, by Jove and tally-ho, the show must go on.

At one point, I thought, “OK, holding up that painting is the least of your problems, gentlemen – why on Earth is that a priority?” But I was still laughing, and the jokes just kept landing.

In fact, I can’t remember a single joke failing to land. More than once, I found myself trying to hold back because I was worried about making too much noise. Luckily, I was not alone in this.

The ensemble was filled with standout performances, but Micah Merida Sybouts as Perkins, the butler, and Kathie Doyle-Lipe, as the stagehand-turned-actress, just about had me falling out of my seat.