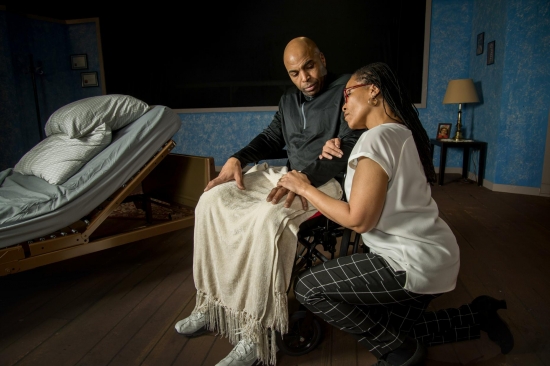 Spokane Civic Theatre’s production of Bryan Harnetiaux’s “Holding On ~ Letting Go” isn’t a family affair, but it might as well be; Harnetiaux and director Jack Delahanty first worked together 40 years ago when the latter acted in the former’s first play.

Delahanty has also worked on Harnetiaux’s “National Pastime,” a play about Jackie Robinson and Wesley Branch Rickey, the white president and general manager of the Brooklyn Dodgers, and “York,” a show about William Clark’s slave, the only black member of the Lewis and Clark Expedition.

The pair also worked together with the Onyx Theatre Troupe, Spokane’s African-American theater company, before its closing.

“I’ve worked with Bryan so often that I know what he’s looking for and how he thinks,” Delahanty said. “We’re pretty much in sync.”

Likewise, all but one person in the cast has worked with Harnetiaux before, and all six actors and actresses have previously worked with Delahanty.

The play follows long-married couple Bobby (David Casteal) and Lee (Adelle Whitehead). Lee is a driven NCAA women’s basketball coach, and Bobby, a former basketball coach, is now an insurance salesman. As Bobby’s health begins to decline, the couple must decide whether to fight his illness or prepare for a graceful departure.