101 things to do in Spokane before you die! 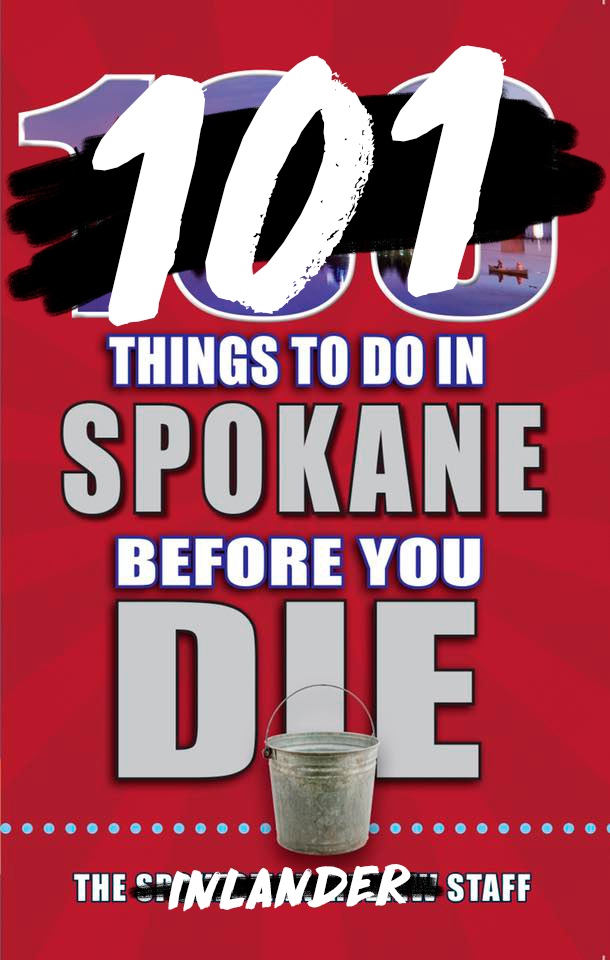 Today, the Spokesman-Review is releasing a new guidebook to the Lilac City titled 100 Things to Do in Spokane Before You Die. It largely consists of obvious activities and it’s being published by Reedy Press in St. Louis, employing the same template that Reedy has used for guidebooks to such wondrous locales as Reno, Tucson, Eugene, Omaha and Traverse City, Michigan. (See actual covers at the bottom of this story.)
We figured it wouldn’t take much to one-up them. Turns out, we were right.

Here, then, are 101 things to do in Spokane before you die:

1. Stand in the center of downtown and think to yourself, “Wow! This might be the very same spot that Craig T. Nelson once stood.”
2. Develop an increasingly violent Caddyshackian feud with a South Hill turkey.

4. Bring whoever keeps throwing “The Pinch” on your front porch to justice.

5. Wag your finger disapprovingly at the kids feeding the ducks at Manito Park.

6. Write a seven-page letter to the editor of the Spokesman-Review asking, “Whatever happened to the comic strip ‘Ziggy?”

9. Tell your family you love them, one last time.

10. Get questioned by Border Patrol at the Greyhound Bus station.

11. Experience Spokane’s sophisticated culinary palate by scarfing down a “Block o’ Fries” at Pig Out in the Park.

12. Warn your neighbors about “suspicious teens walking on sidewalk” on NextDoor.com.

13. Burn the evidence and feed the ashes to the Garbage Eating Goat.

14. Swear that someday, someday, you’ll escape this town and go onto great things, but get so caught up in the day-to-day busyness of life that you never actually leave.

15. Stand outside a Gonzaga basketball game telling everyone that, actually, in the original Italian, it’s correctly pronounced “Gon-zaaah-ga.”

16. Argue with your Seattle friends that Spokane does TOO have a thriving arts and music scene.

17. Get in a debate with your relatives about whether it’s pronounced “‘crick’ or ‘creek’ and “cay-yo-tee or “cay-yote.”

18. Remove a thorn from a wounded marmot’s paw. A time will come when he will repay you for your kindness.

20. Get your legs all scratched up by blackberry bushes at Green Bluff.

21. Bottle up all your emotions at the Milk Bottle.

22. Come up with the most offensive name possible for the drinks at your recently opened daiquiri bar, and don’t let the “haters” force you into apologizing.

24. Take that road trip to Colfax you and your wife have always dreamed of.

25. Loudly explain to the trivia host at the Iron Goat that truth is inherently unknowable and his epistemological arrogance shows his lack of maturity.

26. Try to get a ticket to see the Zags play, but realize that’s impossible because you’re not rich and McCarthey Athletic Center only seats 6,000 people.

27. Fantasize with your friends about what it would be like if Spokane had a Cheesecake Factory.

28. Smuggle your own doves into the Silverwood magician’s show.

29. Pretend the wildfire smoke you inhale won’t have any lasting effect on your health.

30. Watch your dog gleefully chase a frisbee at the South Hill Dog Park while, deep inside, feeling a pit of despair at the horrifying prospect of this dog park someday becoming a school offering pre-teens smaller class sizes to ensure their success in high school and beyond.

31. Live on the South Hill, then drive to Spokane Valley and announce to all who will listen, “Ugh, I would NEVER live in the Valley.”

32. Live in Spokane Valley, land of the Roads Without Potholes, but still drive to downtown Spokane everyday for work or food or the nightlife.

33. Eat at Atilano’s when drunk. Worry about the consequences later.

34. Each and every year of your adult life, dedicate your free time to preparing for Hoopfest. Get knocked out of Hoopfest on the first day, and wonder what it is you’re doing with your life.

35. Zig whenever everyone else is talking about the Zags.

36. Regret not buying a condo in Kendall Yards before it was cool.

37. Order a Busch and do karaoke at the Moezy Inn; get razzed by the regulars.

38. Use the Inlander as kindling.

41. Rage against the City Council (meetings every Monday night).

42. Rent a Lime bike before they’re all chopped up for parts.

43. Drive a too-tall truck under a too-short bridge.

44. Complain about your rent, then talk to your Seattle friends, then think “Spokane is OK.”

46. Get drunk at Twig’s inside River Park Square and go see a movie.

48. Clarify that you didn’t actually win a Pulitzer.

49. Sample the best restaurants of the Inland Northwest during Inlander Restaurant Week.

50. Tell an Inlander reporter that you love the Inlander, “but you only really read the I Saw Yous.”

53. Play some mini golf at Wonderland.

56. Demand Cathy McMorris Rodgers holds a town hall, then fail to show up to her town hall.

57. Take your cat on a hike in Riverside State Park.

59. Get coffee, beer, biscuits and gravy and some flowers at the Saranac Commons.

60. Go a full week without encountering drivers who don’t know how to merge onto I-90.

61. See the Moore-Turner Heritage Gardens, restored to look as they did in 1915.

62. Park your car on the correct side of the street ALL winter (alternates between odd/even sides for plowing).

63. Catch a fish from the Spokane River but throw it back because they’re not safe to eat.

64. Find a parking spot in downtown Spokane in less than 3 minutes, and realize the parking here isn’t bad no matter what all the naysayers think.

65. Submit your amateur art to Terrain only to be rejected.

68. Gamble! Place bets with your friends on whose car window will be broken first.

69. Jump into a giant pile of leaves at Finch Arboretum.

70. Eat at all the restaurants in the Inland Northwest whose chefs have been nominated for the James Beard Award (Santé/Inland Pacific Kitchen, Fleur del Sel, Italia Trattoria, the Wandering Table).

71. Tell your friends you love them by buying a round of $1 PBRs and grilled cheeses at Baby Bar on a Wednesday night.

72. See Tambourine Man dance his pants off at a local music event.

73. Climb to the top of the Harold Balazs sculpture in Riverfront Park and “Transcend the Bullshit.”

74. RSVP on Facebook to all the cool local events happening around town, but don’t actually show up to any.

75. Work on your tan early in the summer before “smoke season” kicks in.

76. Get personally styled in the coolest vintage threads at Veda Lux Boutique in South Perry.

77. Order beer buddies and pizza at Benneditos, then reevaluate how good of buddies you really are as the group tries to split a bill 12 ways via Venmo.

78. See an edgy play in the basement stage of the Spokane Civic Theatre.

79. Feed a tiger at Cat Tales and then go home and feel sad that this beautiful wild animal is living its life in a cage.

80. Take parables seriously: swipe right on all men holding fish on Tinder, then demand they feed you a good dinner.

81. Try and rescue/rehome all the free pitbull-type dogs and free kittens on Craigslist Spokane.

82. Get a beer, a hotdog and some popcorn while you watch a movie at the oldest continually operating theater in Spokane: The Garland.

83. Move here, complain about all the crazy intersections, then find yourself forgetting to warn visitors about them after being here two weeks.

84. Keep us the “most compassionate city in the country” by continuing to support homeless solutions, so long as they’re not in your neighborhood.

85. Watch poignant films at the Magic Lantern and exercise extreme self control as you resist the urge to reach up and make giant bunny ears on the screen.

86. Go to the mountaintop (Schweitzer, probably) and get a little buzzed (at the annual Fall Fest).

87. See how far you can take a drink onto the main floor of The Knit before a security guard tackles you.

88. Ride the Spokane River on a five-dollar tube from the General Store.

89. Watch Vision Quest and then run across the Monroe Street Bridge.

90. Read Jess Walter’s The Financial Lives of the Poets, and then remember that weed is legal.

91. Tuck into a plate of biscuits and gravy at the Satellite Diner at 2 am. Go home and sleep it off.

92. Hike the Rocks of Sharon trail. Watch out for deer.

95. Get your picture taken in front of the “Designated Area of High Prostitution Activity” sign.

96. Quietly judge a lady screaming at her 3-year-old at Shopko.

97. Yell about chemtrails at a Spokane City Council meeting until City Council President Ben Stuckart has you escorted out.

98. Peruse the mounted wildlife at Cabela’s in Post Falls.

99. Get banned from the Spokane Tweaker Blast page for exhibiting compassion.

100. Hide out in the basement bar of Churchill’s, listening to the piano man, and drinking bottles of Arrogant Bastard.

101. Complete the holy trinity: Bloomsday, Hoopfest and Pig Out in the Park.

Read the Article from The Inlander here