Who is Jason Robert Brown?

Who is Jason Robert Brown?

That’s right, he is coming to Spokane Civic Theatre! 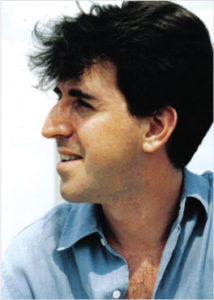 Jason Robert Brown, Composer for Songs for a New World

You may have heard that Jason Robert Brown, composer for Songs for a New World, is attending Spokane Civic Theatre’s production of Songs for a New World on October 27 with a talk-back following the show.  We are very excited about it, so with that in mind, we wanted to know a little more about the composer. Here’s are some facts about him:

Jason Robert Brown started out in the suburbs of New York City. He attended the Eastman School of Music for two years and French Woods Festival of the Performing Arts during the summer. Working as an arranger, conductor and pianist for shows and playing several nightclubs and piano bars started his career in New York City. Two of his biggest influences were Sweeney Todd: the Demon Barber of Fleet Street and Sunday in the Park with George. At the age of 23, he was invited to dinner with Stephen Sondheim after seeing one of Sondheim’s musicals.

Songs for a New World was the first major production of 25-year-old Jason Robert Brown’s compositions. It had a limited run and was directed by Daisy Prince at an off-Broadway Revue. “Stars and the Moon,” one of the songs from the show, is one of his best-known compositions. He won the 1999 Tony Award for Best Original Musical Score for his songs written for the Broadway musical Parade, directed by Hal Prince. He wrote the book and songs for The Last Five Years, and contributed several songs to Urban Cowboy. He also wrote the music and lyrics for 13.

To quote one of the vocalists in Spokane Civic Theatre’s production, “Jason Robert Brown’s music is difficult, but very beautiful when it’s done.” His songs cover a wide vocal range, especially for men, and have complex harmonies. He blends pop/rock with gospel, theatrical, classical and jazz. These and many other things make his music distinct.

So, if you’d like to see Songs for a New World at Spokane Civic Theatre, call 509-325-2507, visit us at 1020 N. Howard or buy tickets online at TicketsWest. This is a special fundraiser showing only two nights: Friday, October 26, 2012 and Saturday, October 27, 2012. Don’t miss out on this great show! For more news and updates, visit our Twitter or Google+ pages.