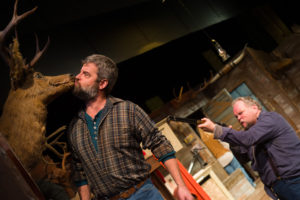 There are Yoopers in da Spokane Civic Theatre camp!

A few things before watching Escanaba in Love: Folks hailing from the Upper Peninsula area of Michigan are Yoopers. They even have their own representative in the Michigan state legislature. Beer is the drink of choice and they end many a sentence with they word “eh“. You’ll hear them hollering Holy Whaa a time or two as well. And starting tomorrow night, January 11, the Yoopers take the Main Stage at Spokane Civic Theatre for Jeff Daniel’s mighty comedy, Escanaba in Love.

Welcome to the Soady Hunting Camp

Escanaba in Love is the prequel to Escanaba in da Moonlight which literally had audiences rolling in Civic’s isles. This time, it’s deer season (what else is new) and Albert (Dave Rideout) and his dad (Ron Ford) are awaiting the arrival of Albert Soady Jr. (Jon Hudson). Time for the young man to bag a buck. Before the young un arrives, the audience gets to meet Salty (Chris Taylor) who’s a little off his, well, rocker. Enter the son. And enter Bog Betty Balou (Lindsay Teter), his new wife. Da Camp becomes da honeymoon. Now, let’s get something straight here, those of the female persuasion are not allowed in da Soady camp. Silliness ensues. Laughter abounds and yes, farts are farted. We can’t forget the last part.

This is NOT about the subtleties 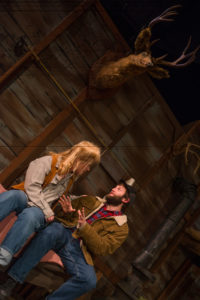 Chris Taylor, who plays the sodden Salty Jim Negamanee, says even if you haven’t seen Escanaba in da Moonlight, the Escanaba in Love story is still pretty easy to follow and everything about Escanaba is “in your face”. In fact he says one of the things he likes about the script is that every “major plot point” gets covered several times. Usually because one of the characters was too dumb to understand it in the first place”. Seems to us this is the perfect time to crack a PBR or two for a play pre-funk because it’s not like you’ll lose said plot point.

Keep an eye out

This play is for you

Doesn’t matter if you are a theatre buff, a hunter, a man, woman or child. Doesn’t matter if you know what the Scottish Play is or not. Doesn’t matter if you are high brow, low brow or somewhere in between. This truly is a comedy for everyone. If you like farce, laughing, channeling your inner teenage boy, or just having a good time, you will love Spokane Civic Theatre’s Escanaba in da Moonlight. So get off your keyster and call 509.325.2507, the Spokane Civic Theatre box office, and get your tickets. The show runs from January 11 through February 2 and is directed by Scott Doughty. See in you in Yooper land.