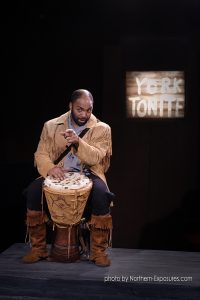 In 2004, Spokane Civic Theatre’s playwright-in-residence Bryan Harnetiaux received a request from Gonzaga University’s drama department to write a play about the 1804 Lewis and Clark expedition. Harnetiaux said he was honored to attempt a play for the bicentennial celebration of the great Western exploration.

But after two months of research, Harnetiaux had to throw in the towel on the entire project. He felt defeated.

“Nothing jelled,” said Harnetiaux, who was also a law professor at Gonzaga. “I told the school I came up empty.”

Then a week later the right idea came to him like a living being. “I woke up one morning, and there was York at the foot of my bed,” Harnetiaux recalled.

York was the slave who accompanied Lewis and Clark on their two-year journey to explore the West. He was the only black man among the 40 members of the Corps of Discovery, which made the historic two-year journey.

Harnetiaux immediately called his actor friend David Casteal, who taught at Cooper Elementary in Hillyard, to collaborate with him on writing and starring in the play. The resulting one-man show, starring Casteal as York, premiered at Civic in 2005. It was even shown off off-Broadway in New York City. The play was revived for a short production run in 2008, then lay dormant for nearly 8 years. Casteal recently revived his role and toured last year.

For two nights this year, Casteal will again play York. He’ll be on the Civic main stage on Friday, in time to celebrate Black History Month. The theater hopes to use the play to introduce a new set of audiences to an iconic figure in our culture who has largely been overlooked. Casteal also will take the play to the Northwest Museum of Arts and Culture on Feb. 8 for a presentation co-sponsored by the museum and the Spokane chapter of the NAACP.

Article by Audrey Overstreet of The Spokesman Review