Turn of the Screw, part deux

It’s time to gear up for Kaleidoscope 2013

And no, we do not mean the little tube toy with mirrors and glass and colors that uses reflections to create ever changing patterns. We mean the State Theatre Festival. This year’s Washington State Community Theatre Festival will be held in Bremerton at  the Bremerton Community Theatre and takes place February 28 through March 3 and includes participants from the Tacoma Musical Playhouse – they happen to be presenting The Drowsy Chaperone which Civic opens on the Main Stage on February 22. Small theatre world, we tell you – and the Richland Players among other theatres. The full list is available on the Kaleidoscope flyer on the Bremerton Theatre website.

Civic is turning the screw for this year’s competition 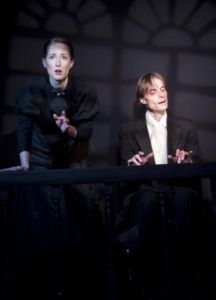 In October 2011, Turn of the Screw, directed by Susan Hardie, consistently played to sold out audiences. It was part mystery, part scary story, part thriller and more. Doug Dawson played The Man and Laticia Widman, The Woman. And yes, those were the actual names of their roles. The play received wonderful reviews from both professional and lay reviewers in the Spokane community.

We interviewed Susan to get the 411 on the Festival, Turn of the Screw and Spokane Civic Theatre’s plans moving forward:

Spokane Civic Theatre: Susan, will you explain the AACT competition?

Susan Hardie: The American Association of Community Theatre (AACT) is a non-profit organization that provides networking, resources and support to community theatres across the nation. Every two years, they hold a giant national theatre festival called AACTFest. Community theatres from across the country (broken down by AACT into 10 regions) enter productions for adjudication and advancement from state to regional to national level. Spokane Civic Theatre has had a remarkable history at AACTFest, advancing and receiving more top honors, I believe, than any other Community Theatre in the country. You can look up the stats on Civic’s website I think…

Civic: Who is going to this one and where is it?

Susan: This time, Civic has chosen our production of “The Turn of the Screw”, a show I originally directed in Studio Theatre last season. We are heading to Bremerton, WA to compete at the first level, the State Competition. We’ll be competing with eight other theatres from around WA state for advancement to the Regionals.

Civic: How long have you been preparing? What does it take to put this together? 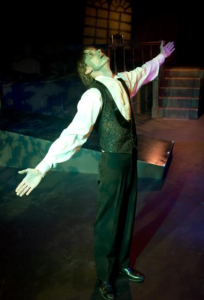 Susan:I started cutting the play quite a few months ago. Festival rules dictate a sixty-minute time limit for each show. If your show goes one second over 60 minutes, you’re screwed. Disqualified. I cut about 25 minutes off the show. That was an interesting process… We all started getting together to read/time the newly cut script and plan rehearsals, etc. starting in November, I think. We just met a few times in Dec & January and now that we’re into February we’re hitting it hard. Several things need to happen: the cast has to re-learn a cut version of the script; the blocking must change to accommodate a proscenium stage with different dimensions than we had in the Studio; the set must be redesigned to fit the new space, to travel, and for ease of assembly. But the really fun stuff is the opportunity to revisit the show and continue to explore it, tweak it and make it better!

Civic: Synopsis of Turn of the Screw?

Susan: Based on Henry James’ classic ghost story, “The Turn of the Screw” is the story of a young, impressionable Governess who travels to a lonely English manor house called Bly to care for two recently orphaned children. But she is not their first governess. Her predecessor, Miss Jessel, drowned herself when she became pregnant by the sadistic valet, Peter Quint, who was himself found dead soon after under mysterious circumstances. Dark, shocking secrets emerge, and soon the Governess is seeing specters of Quint and Jessel haunting the children. The classic question this piece begs (and the subject of endless literary debate) is, are the ghosts real, or are they the product of the Governess’ own fevered imagination? The play, like the novella, leaves this purposefully ambiguous. So be prepared to come and use your own imagination, which sometimes can be scarier than anything you can see with your own eyes.

Civic: Which scene will they be playing out?

Susan: Rather than cut big chunks out of the script, I peeled out select lines or parts of lines, or speeches that were not vital to the understanding of the play. So you will see a “condensed” version of the original.

Civic: Can anyone attend this?

Susan: Absolutely! It would be wonderful to see lots of folks at our free final dress rehearsal at Civic on Monday, 2/25 at 7:30pm! The audience is the final, vital piece of the puzzle and having this opportunity to play before a crowd is huge! And I think for the audience, it’s interesting to see the cast & crew assemble the set in under 10 minutes and then strike it in under 10 minutes. That is definitely part of the performance. The Festival is open to the public too (although not free), and I’m sure the theatre could get information to anyone who wished to attend and cheer us on! We perform at the Bremerton Community Theatre on Saturday night, March 2nd at about 8:25pm. We will be the final production at the Festival. So if you’re in the neighborhood… come on by!