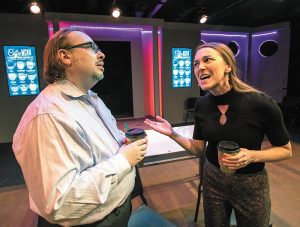 Elliot Leeds was dead: to begin with. There is no doubt whatever about that. His private plane crashed, the wreckage searched, no survivors found.

And still, like Marley’s ghost, the late technology tycoon reappears one night, courtesy of the data on a couriered hard drive, to urge the living to reexamine their status quo. Only, Leeds has radically different notions about what it means to save a soul.

The ontological question that threads through playwright Jeffrey Jackson’s Two Point Oh is set up in a poignant opening scene, where Leeds (Dalin Tipton), flying to his keynote at a global summit, is videoconferencing with his wife Melanie (Allison Peterson) back at home in their high-tech Silicon Valley cyber mansion. They’ve been trying for a baby, but that inherently physical act has been complicated by distance. Leeds attempts to placate her by saying that modern technology’s virtuality comes close enough to flesh-and-blood presence. Melanie, frustrated by its glitches and limitations, is unpersuaded.

After her husband’s digital resurrection, grief compels her to reconsider. Here’s a convincing likeness of Elliot, displayed à la Max Headroom on the set’s two large portrait-oriented monitors, responding in real time to Melanie’s questions, reassuring her, singing their shared song in a goofy voice. It’s no different to their video chats. Sure, Elliot might now be an elegant interplay of algorithms and subroutines; but really, how far removed is that from the elegant interplay of synapses and hormones?

When Ben Robbins (Ben Dyck) is visited by the electronic specter of his former business partner, he’s surprisingly skeptical. Despite his technophilia, Robbins can’t quite accept existence being distilled into ones and zeroes: How can original thoughts emerge from a finite set of coded instructions? For a time at least, Robbins will argue that the method — well, hack might be a better term — Leeds has used to cheat death offers only the semblance of life.

Meanwhile, their company’s new CEO Catherine Powell (Julie Berghammer) and TV blowhard Jerry Gold (Ron Ford) join the conversation in tangential ways. Pandering to his audience, Gold tries to both sensationalize and make sense of Leeds’ disembodied self. Powell sees the phenomenon as both a liability and an opportunity.