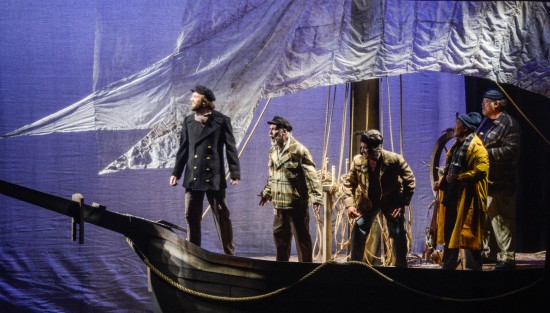 F. Scott Fitzgerald famously said that there are no second acts in American lives, but in the case of the characters in “The Christmas Schooner,” it’s the second act that brings them to life. Written by John Reeger, with music and lyrics by Julie Shannon, it’s a musical that explores the spirit of the holidays and the immigrant experience in America.

It begins in 1881 in Manistique, Mich., as a family of Germans prepares for Christmas in America. The Stossels – Peter (Bryan Agee), Alma (Heidi Santiago), and their young son, Karl (Jordan Santiago) – have embraced American customs while still recognizing their German heritage, and while Peter’s stodgy father, Gustav (Gary Pierce), still clings desperately to Old World traditions.

Although the Stossels are comfortable in their new home, a tiny lumber town on the coast of Lake Michigan, Peter’s cousin Martha (Phedre Quimby), living in Chicago, is homesick. She admits that she has been reminiscing about past Christmases in their native country, in particular the lush pine trees, scarce in the big city, that they used to decorate when they were younger.

This letter inspires Peter, who believes no one should be without a Christmas tree (or the Tannenbaum, as it’s known to the Stossels) during the holidays. So he loads up his ship with a batch of pine trees and plans to deliver them to the German immigrants in Chicago, even though the weather conditions on Lake Michigan are likely to be hazardous.

“The Christmas Schooner,” now playing at the Civic Theatre, is loosely based on the true story of the Rouse Simmons, a ship that frequently traveled between Grand Haven, Mich., and Chicago, becoming famous in the early 20th century for hauling and selling Christmas trees. It’s a delightful story, and one that should probably be better known. Scott Doughty, director of Civic’s production, does a good job of imbuing the production with Christmas spirit.

However, Reeger’s book is at times slow going, and the first hour or so of “The Christmas Schooner,” which establishes its characters but doesn’t really develop them, is often plodding. Even some of the Civic cast, many of whom have been terrific in other productions, seem a little unsure of the material. As for the songs, many of which are based on themes from Christmas carols, they’re not particularly memorable, and the lyrics (sample: “Put down the strudel, Mrs. Stossel”) are sometimes groanworthy.

But the momentum picks up considerably in the play’s second act, when Reeger narrows the focus of his story and starts to sketch out the characters. The play jumps forward in time – Peter has made a tradition out of delivering trees, and young Karl has grown up (he’s played as a teenager by Logan Tiedt) and is now accompanying his father on the voyages – and deals with love, loss and faith in a surprisingly adept manner.

If there are any problems with “The Christmas Schooner,” they’re all in the material, because the Civic has done a great job from a technical aspect. The performances, both dramatic and vocal, are universally impressive – Santiago as the unshakeable Alma and Pierce as the cantankerous but steadfast Gustav are standouts – and the set design and costuming are beautiful to look at and wonderfully detailed. Even if the script is a bit sluggish, the Civic’s creative team has put on an impressive production.