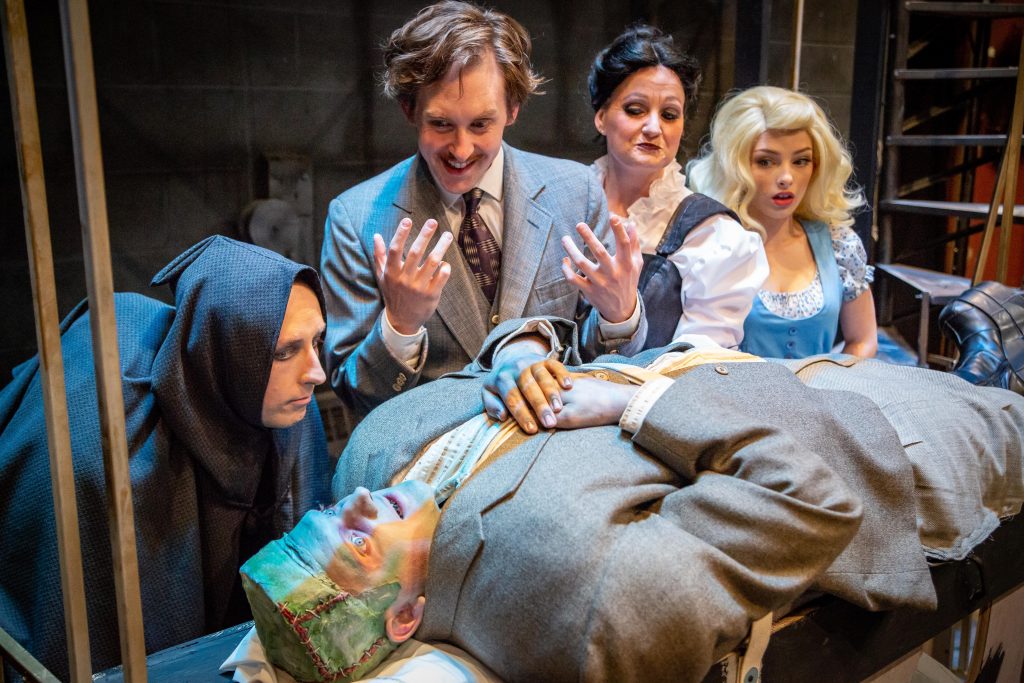 “Young Frankenstein,” the musical, is based on the movie of the same name, which was directed by Mel Brooks and written by Brooks and Gene Wilder, who starred in the film.

A parody of horror films, it’s no surprise that the film is quite silly and over the top. Luckily for fans, and for those who haven’t seen the movie, so is the musical, which opened at Spokane Civic Theatre on May 17.

The musical features a book by Brooks and Thomas Meehan and music and lyrics by Brooks.

McNulty was pitch-perfect as Frankenstein, especially in “The Brain” and “Life, Life.”

It was really fun to watch McNulty take the character from one who resists his family trade to one who slowly becomes just as wild about creating a monster as his grandfather once was.

Haren, in his Civic debut, deserves a lot of props for his role as the monster, for walking and dancing in platform shoes and for infusing a practically non-verbal character with so much expression and emotion.

Haren and McNulty were a winning pair in “Puttin’ on the Ritz.”

So too, were McNulty and Hansen, as Igor, throughout the show. The pair were especially hilarious in “Together Again.”

Hansen made a fantastic Igor and was responsible for a lot of the laughter from the audience, especially when explaining to Frankenstein that he had brought him the brain of “Abby Normal.”

Having recently seen (and loved) Peterson as the no-nonsense Rose in Civic’s production of “The Flick,” it was really fun to see her as Inga, an innocent, yodeling lab assistant.

Her big numbers, “Roll in the Hay” and “Listen to Your Heart,” were standouts of the evening.

I was also happy to see Rebecca Craven, who played a wicked Miss Andrew in Civic’s “Mary Poppins,” as the housekeeper Frau Blücher, who assists Frankenstein in bringing his monster to life like she did for his grandfather.

Her performance of “He Vas My Boyfriend” and scenes with Frankenstein’s fiancee Elizabeth Benning (Christina Coty) were lots of fun to watch.

Coty, for her part, made for a fantastic Elizabeth, a woman who craves intimacy yet hardly allows Frankenstein to get near her (“Please Don’t Touch Me”).

Opening number “The Happiest Town,” “Please Don’t Touch Me,” “Join the Family Business” and “Transylvania Mania” were fantastic group numbers. Keep your eye on Dominick Betts at the end of “Happiest” as he dances offstage.

I’ve always been a fan of scenic and lighting designer David Baker’s work, and “Young Frankenstein” was no different. Scenes in the estate and the laboratory were beautifully done (scenic construction by Sam Holland and Dennis Pham), and the set piece that transitioned from a ship to a train was really impressive.

Closing its regular main stage season with “Young Frankenstein” was a really smart choice by Civic. It’s a fun and funny musical with a cast talented enough to do the classic justice.

Article by the Spokesman-Review

Photo by Libby Kamrowski of the Spokesman-Review