REVIEW: Civic’s ‘Matilda: The Musical’ as charming as beloved book and movie 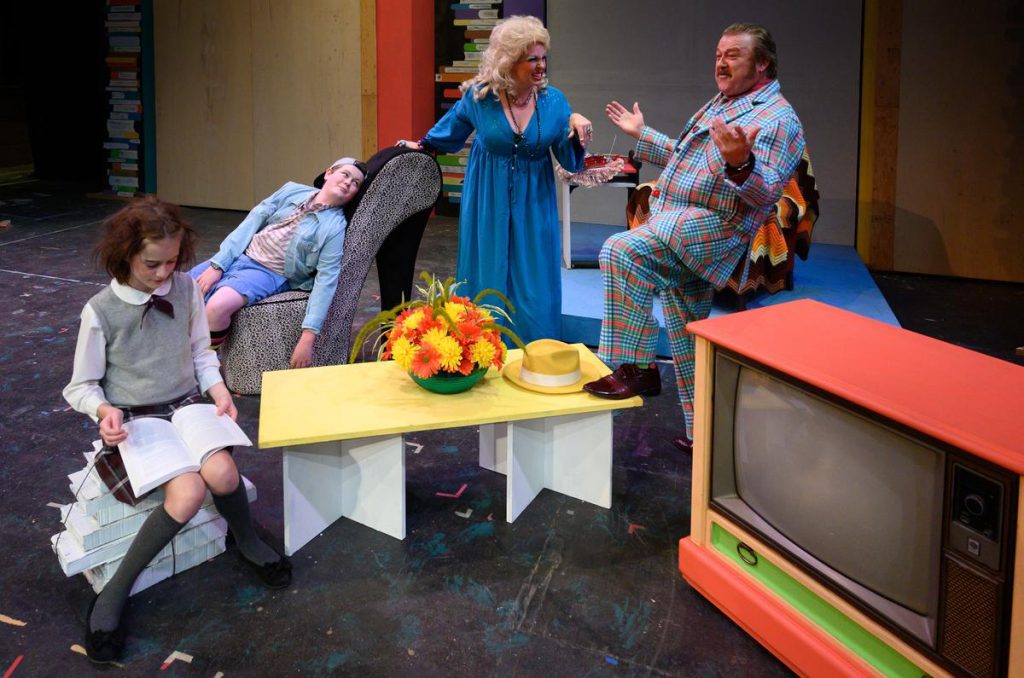 If you’re interested in seeing the rising stars of local theater, those who will be gracing stages for years to come, Spokane Civic Theatre’s production of “Matilda: The Musical” is a great place to start.

Young performers stole the show, which has all the charm of the Roald Dahl novel on which it’s based and the film starring Mara Wilson, Danny DeVito and Rhea Perlman, though there was enough cheeky (but not crude) humor to keep adults interested too.

Matilda is a complex character – intelligent, imaginative and clever, but also longing for love and affection. Eleanor Weitz, in her Civic debut, handled the balance like a seasoned performer.

She played cheeky well, like when scheming to dye her father’s hair or putting superglue on his hat, but also showed a really sweet side when interacting with her beloved librarian Mrs. Phelps (Jauna Cabbage) and teacher Miss Honey (Shelby Freesmeyer).

A high blue belt in taekwondo, according to her bio in the program, Weitz put her skills to use during the show, and there are plenty of opportunities to listen to her impressively big voice.

The musical was especially fun to watch when the younger performers, whether elementary to middle school age or teenaged, were onstage, especially during “School Song” and “Revolting Children.”

There were times during those songs when performers weren’t perfectly in sync, which caused some of the lyrics to sound a little mushy, but those moments were rare.

Michael K. Hynes and Colleen Kirsten were brilliant as Matilda’s brash, uncaring parents. It was peculiar to see so many scenes during which parents admonish their child for – gasp – reading, but the pair sold it.

On the other hand, Cabbage and Freesmeyer were wonderful performers to have in Matilda’s corner, encouraging her creativity and showing her what it’s like to be loved. Freesmeyer has an especially pretty voice, as heard during her solo numbers “Pathetic,” “This Little Girl” and “My House.”

Doug Dawson was hilarious as Mrs. Trunchbull, completely committing to the physically demanding role despite his top-heavy costume.

Mathias Oliver, too, brought a lot of humor to his physically demanding role as Rudolpho (he also played a clown and a doctor), Mrs. Wormwood’s dance partner. Oliver and Kirsten were great together in “Loud.”

The Civic Theatre team really pulled out the stops to create incredible special effects for this show, namely the chocolate cake Bruce (Brody Else) is forced to eat, the scene in which Mrs. Trunchbull swings Amanda (Sadie Overstreet) by her pigtails, a scene in which Matilda moves a cup with her mind and a scene in which writing appears on a chalkboard.

There also are some really lovely projections during scenes in which Matilda is telling Mrs. Phelps a story. Having grown up reading the Dahl novel and watching the 1996 film, I knew what to expect going in, but I still found myself sucked in by the sweetness and humor of the Civic production.

The musical features a book by Dennis Kelly and music and lyrics by Tim Minchin. Director Kathie Doyle-Lipe also choreographed the musical, and “Matilda” was music directed by Henry McNulty.