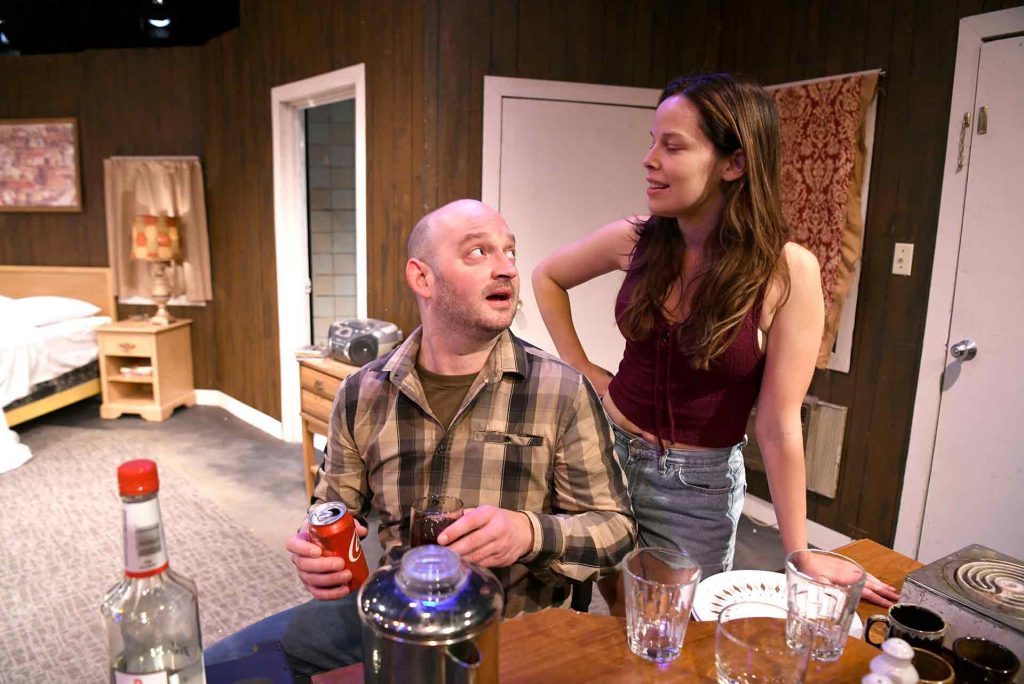 If you want a lesson in contrast, look no further than Spokane Civic Theatre’s current offerings.

On Sept. 14, the theater opened its 72nd season on the main stage with perhaps the most feel-good musical around, “Mary Poppins,” complete with a magical flying nanny, cheery tunes and colorful costumes.

But just downstairs in the Firth J. Chew Studio Theatre, things are far from practically perfect.

“You have ‘Mary Poppins’ upstairs, and you have the bugs in the basement,” “Bug” director Marianne McLaughlin said with a laugh.

McLaughlin originally submitted another play for consideration, but, after reading the script, immediately agreed to direct “Bug.”

“It was their vulnerability,” she said. “It was the rawness of these characters. They represent a subculture … This play is really, for the actors, theatrical gymnastics. These characters Tracy Letts wrote are fraught with so much complexity and so well written.”

The characters, McLaughlin said, slowly pull audiences into their world.

On one hand, we’re happy that these two down-and-out people have found each other. But on the other hand, we don’t know how much we can trust what they say.

Letts doesn’t give a definitive answer as to whether what White and Evans are experiencing is real or the result of paranoia, which McLaughlin sees as the beauty of “Bug.”

“There’s humor, there’s deep sadness and there’s some very shocking moments that do challenge the audience,” she said. “It challenges their own reality. ‘Do we believe their reality or is this a psychosis that’s going on with these two people who never leave this little motel room?’ ”

After months of working on the show, McLaughlin said she and the cast still ask each other “How much is real here? How much is conspiracy theory?”

“It takes the audience on a real roller coaster ride,” she said.

To help bring the seedy motel room to life, McLaughlin studied photographs of old motel rooms and recalled the rooms she and her husband stayed in during a lengthy trip early in their marriage.

“I wanted to get an idea of that whole feeling of an old hotel room that’s been there since maybe the ’60s, the different fabrics and the colors and the seediness of it,” she said. “The feelings, the light and what it would be like to be in there and not leave for an extended number of days.”

Sound too plays a big part in “Bug,” with McLaughlin calling it a sixth character. Different sounds triggers Evans’ paranoia, thus pulling White, and the audience, deeper into his conspiracy theory-fueled thoughts.

“Bug” is the first play McLaughlin is directing following a three-year break to return to acting.

She knows “Bug” is not a typical play, but it’s one she thinks is right at home in Civic’s studio theater, a place she said welcomes alternative theater and gives actors the chance to play roles they might not often get to play.

“The emphasis isn’t so much on how much money the plays are making but rather opening a door for the Spokane audiences to be able to see characters they wouldn’t otherwise be able to see maybe up on the main stage,” she added. “Jake Schaefer, the creative director, and Mike Shannon, our executive director, are really trying to support the studio in that way, and I’m glad because that’s what the studio has always been about.”