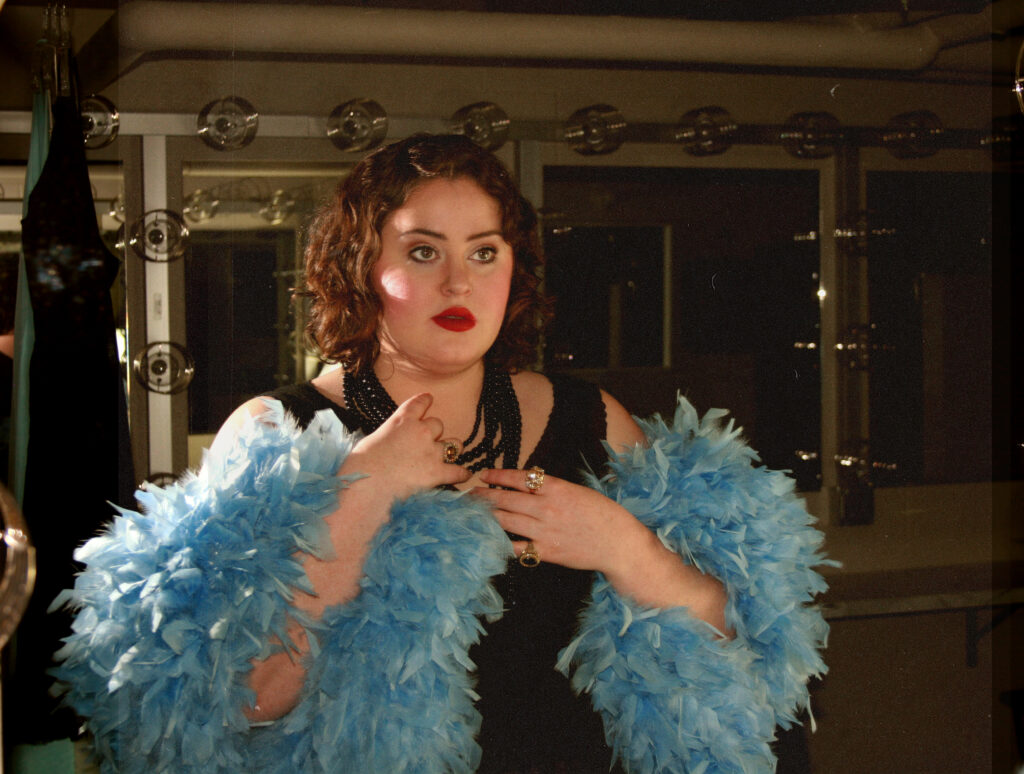 Set in New York City, before and following WWI, “Funny Girl” is a semibiographical musical account of the life of “Ziegfeld Follies” star Fanny Brice and her loving but tempestuous marriage to Nicky Arnstein.

Directed by Jake Schaefer with musical direction by Henry McNulty, Spokane Civic Theatre’s production of “Funny Girl” opens Friday at 7:30 p.m. Delayed one week by material shortages and other supply chain issues, the show will run through April 24.

The story plays out in a flashback as Fanny (Kalla Mort) sits at her dressing room table on the day Nicky (Joseph Quintana) is set to be released from prison.

“What’s really incredible about ‘Funny Girl’ is even though it is this big spectacular of a musical, it’s also a real person’s story,” Mort said.

In the flashback, we meet a teenage Fanny, still struggling to land her first vaudeville role. Fanny’s mother Rose (Melody Deatherage) discourages her from pursuing a life onstage because “if a girl isn’t pretty,” she might as well go home.

But Fanny, knowing her worth and the talent she possesses, perseveres regardless. With help from her friend Eddie (Jonah Taylor), Fanny learns the audition numbers and forges ahead.

Returning to the stage for the first time since the pandemic, Mort is thrilled to be taking on the role of Fanny. Growing up as a plus-size actress, Mort has often been turned down for “not fitting the ideal.”

“They’ll say, ‘Oh, yeah, you’re the best singer in the room, but we can’t cast you because you’re too fat’ or ‘you don’t look the way that I want you to,’ ” she said. “Often, it was you don’t fit my vision for this show.”

She quickly found a kindred spirit in Fanny.

“What attracted me to the role is that I knew that, in a way, I could show up as me,” she said.

“This role changed the way that we look at musical theater,” she said, paying tribute to Barbra Streisand’s portrayal of Fanny in the 1968 film. “It’s no longer the Ziegfeld Follies era of pretty girls and skimpy clothing, smiling and waving.

“That’s not to say there was no value in what it was before, but now there’s more depth to it, more thought-provoking art.”

Despite initial pushback, Fanny manages to convince the director of the vaudeville show to give her a chance (“I’m the Greatest Star”). Fanny goes on to headline the “Ziegfeld Follies,” making the show’s closing number her own comic twist.

After the show, Fanny meets Nick. Nick has a history of gambling, but he sees Fanny for the talent she is, and to her he is the peak of sophistication and good looks.

Already falling in love, Fanny invites Nick to an after-party for the opening night performance at her mother’s home on Henry Street. They part ways at the end of the night. But after a short separation, the two reunite in Baltimore and admit their feelings. Determined to marry Nick, Fanny sings “Don’t Rain on My Parade.”

The couple marry and start a family. Meanwhile, Fanny continues to flourish in her starring role with “Ziegfeld Follies.” Unfortunately, Nick’s ambitions seem to be thwarted at every turn. Predictably, the disparity starts to chip away at their marriage.

“It’s so incredible the way that people have rallied to get things done,” Mort said, referencing the shipping delays that the crew has been facing throughout the production. “I would not be able to do the show if I didn’t have every single person’s support.”