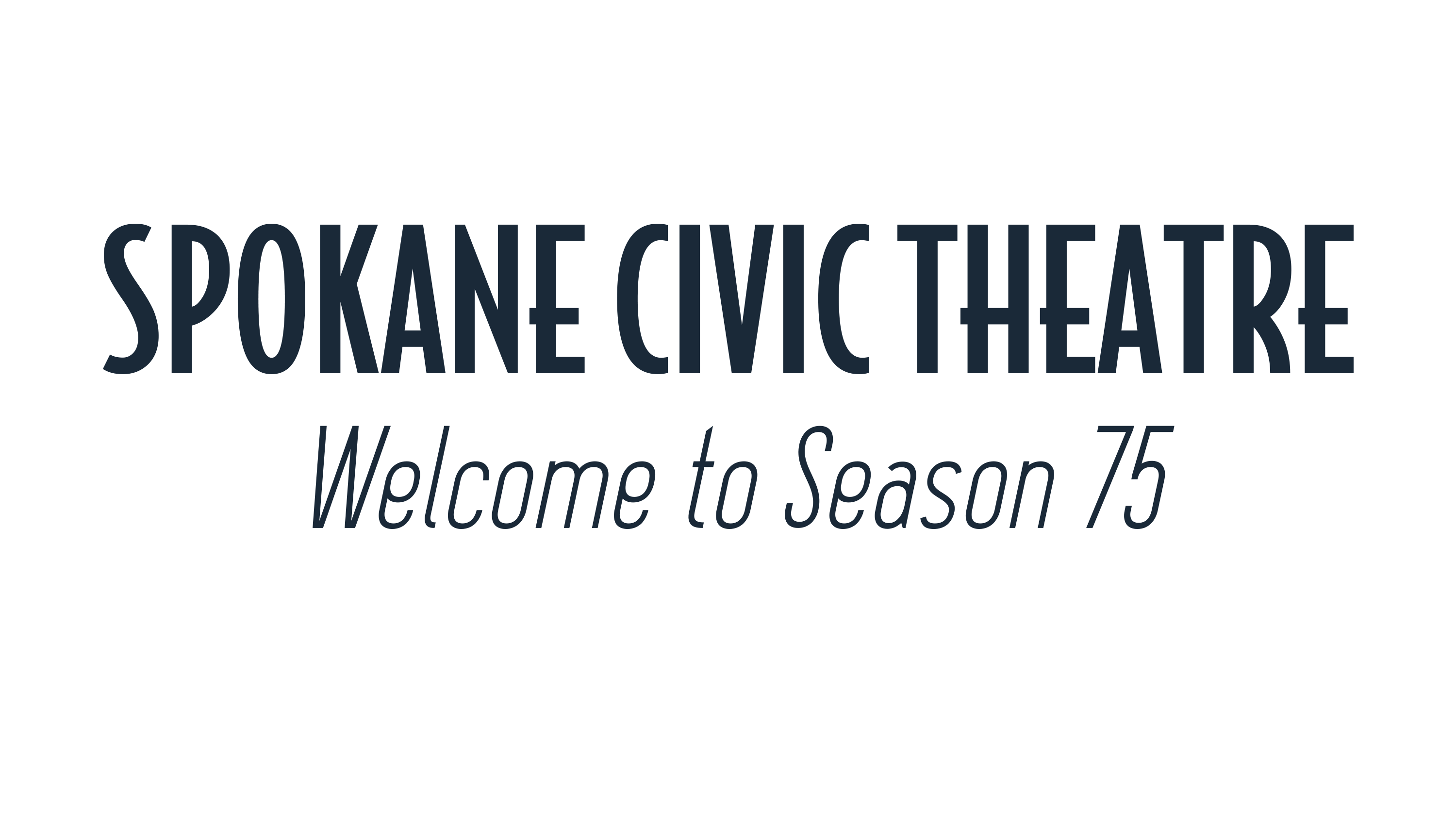 From timeless treasures to acclaimed new works, experience adventure and discovery with Season 75.

What is included in Memberships?

Spokane Civic Theatre has three season ticket packages. Which is right for you?

Discounts for Seniors, Military, and Students available for each package.

How do I become a Member?

What are Civic’s audience health and safety policies?

After being pandemic paused for too many months, Spokane Civic Theatre reopened in January 2022. Health and safety policies have been communicated on a rolling basis. Effective May 6, 2022, masks are no longer required while inside the Civic facility. Vaccination against COVID-19 is encouraged.

Thank you for supporting Spokane Civic Theatre’s Values and promoting good health in our facility which, ultimately, has kept us active and open. Your flexibility and cooperation is greatly appreciated.

The performance date I want to attend is sold out, can I be put on a Wait List?

Yes! If you have purchased a Membership and the performance date you have chosen is sold out, Spokane Civic Theatre can put you on a Wait List for the performance at any time. As a Member you can get on the Wait List before it is available to single ticket patrons.

What if a scheduled show changes?

Unfortunately, in the past Spokane Civic Theatre has needed to change a scheduled season show mid-season. In the unlikely event that this happens, Spokane Civic Theatre will do its best to provide Members with an announcement of the change via mail, email, and social media. For tickets previously reserved for these performances, those tickets will directly transfer to the same performance date and seat selection for the replacement production.

Accessible seating is available in both the Main Stage and Studio Theatre and intended for patrons with accessibility needs only. Please call the Box Office for assistance and to purchase tickets.

Follow the yellow brick road in this delightful stage adaptation of L. Frank Baum’s beloved tale, featuring the iconic musical score from the MGM film. The timeless tale, in which young Dorothy Gale travels from Kansas over the rainbow to the magical Land of Oz, continues to thrill audiences worldwide.

ADAPTED BY JOHN KANE FROM THE NOVEL BY L. FRANK BAUM

As miserly old Ebenezer Scrooge falls asleep in his dingy quarters on Christmas Eve, three ghosts appear, each revealing to Scrooge the wrong doings of his life and what will happen if he continues in his evil ways. He is racked with fear and remorse and sets out on Christmas Day to bless with his newfound generosity all those whom he has neglected and abused.

In The 39 Steps, a man with a boring life meets a woman with a thick accent who says she’s a spy. When he takes her home, she is murdered. Soon, a mysterious organization called “The 39 Steps” is hot on the man’s trail in a nationwide manhunt that climaxes in a death-defying finale!

BY PATRICK BARLOW FROM THE NOVEL BY JOHN BUCHAN

This behind-the-music story of four blue-collar kids who became one of the greatest successes in pop-music history will take you from the streets of Newark to the heights of stardom. Experience electrifying performances of golden greats that took these guys all the way to the Rock and Roll Hall of Fame: “Sherry,” “Big Girls Don’t Cry,” “Can’t Take My Eyes Off You,” and more.

The mysterious confectionary wizard, Willy Wonka, is opening the gates to his mysterious factory…but only to a lucky few. Young Charlie Bucket and four other golden ticket winners will embark on a life-changing journey through Wonka’s world of pure imagination including semi-dark chocolate waterfalls, exquisitely nutty squirrels and the great glass elevator.

Jordan Berman would love to be in love, but that’s easier said than done. So until he meets Mr. Right, he wards off lonely nights with his trio of close girlfriends. But as singles’ nights turn into bachelorette parties, Jordan discovers that the only thing harder than finding love is supporting the loved ones around you when they do.

Pablo, a high-powered lawyer, and doctoral candidate Tania, his very pregnant wife, are realizing the American dream when they purchase a house next door to community stalwarts Virginia and Frank. But a disagreement over a long-standing fence line soon spirals into an all-out war of taste, class, privilege, and entitlement. The hilarious results guarantee no one comes out smelling like a rose.

A humorous and moving portrait of Rosalind Franklin, one of the great female scientists of the twentieth century, and her fervid drive to map the contours of the DNA molecule. A chorus of physicists relives the chase, revealing the unsung achievements of this trail-blazing, fiercely independent woman. A play about ambition, isolation, and the race for greatness.

In the opening scene, two Supreme Beings plan the beginning of the world. Once they’ve decided on the color scheme of the races, a little concerned that white people will feel slighted being such a boring color, they create sex and the sexes. Afraid women will have too many advantages, the Beings decide to make childbirth painful and to give men enormous egos as compensation. From this moment, the audience is whisked through the outrageous universe of Kathy and Mo, where two actresses play men and women struggling through the common rituals of modern life: teenagers on a date, sisters at their grandmother’s funeral, a man and a woman together in a country western bar.

BY MO GAFFNEY and KATHY NAJIMY

Jackie Robinson, together with Branch Rickey, the white President and General Manager of the Brooklyn Dodgers, overcomes the intransigent racist culture of major league baseball, this country’s “national pastime,” by breaking the color line in 1947.

In commemoration of the 75th anniversary of Jackie Robinson’s achievement, National Pastime returns to Spokane Civic Theatre in April 2023 after premiering in the Firth J Chew Studio Theatre on April 18, 1998.