Experience an exciting fast track from page to stage! Develop confidence in storytelling, character creation and gain an understanding of theater fundamentals while having fun in a safe and creative environment. See the learned skills put into action during an end of the week performance, open to family and friends.

Please note, all class participants must provide emergency contact information, be dropped off and picked up only by approved and prior advised guardian/parent and adhere to health and safety policies on a rolling basis (please expect details via registration confirmation).

Financial assistance available for all classes, productions and workshops. 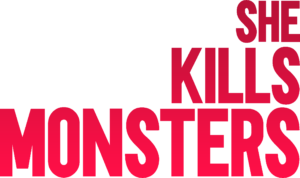 She Kills Monsters tells the story of Agnes Evans, a young woman grieving for her deceased sister. The Evans sisters never were especially close, but after Tilly’s death Agnes resolves a notebook containing a game scenario created by her sister. She discovers that Tilly was well-known Dungeons and Dragons player. In order to unlock more secrets about her mysterious young sibling, Agnes recruits a “dungeon master” named Chuck to help her understand and grieve Tilly. Chock-full of elves, fairies and ogres, She Kills Monsters is a surprisingly sweet tale of friendship, loss, and acceptance.

This course features training in stage combat and puppetry, with opportunities for students to be involved in a full production experience with sets, special effects, sound, and lights.

NARRATOR
Describes the events going on in the story and gives background description of the reason behind the story and the characters. The narrator is described as sounding like Cate Blanchett from The Lord of the Rings.

TILLIUS THE PALADIN (TILLY EVANS)
A nerdy, tomboy and closeted lesbian in real life who is obsessed with Dungeons and Dragons. In the world of D&D, she’s a level 20 Paladin: spunky, powerful, agile and brings a young energy and fresh spirit. Tilly dies at the very start of the show; the character that shows up in the play is a creation of Agnes’s imagination.

AGNES EVANS
Tilly’s older sister. She is an average girl with no knowledge of D&D culture. Longs to learn more about her deceased sister.

CHUCK
A dorky, outspoken but self-aware nerd who loves the “Grunge Rocker roadie” look and a D&D enthusiast.  He acts the Dungeon Master for the game Agnes plays.

MILES
Agnes’ boyfriend, not at all into “nerd culture”. He tries very hard to be supportive and present. Eventually, he joins in the D&D game playing alongside Agnes.

LILITH MORNINGSTAR (LILY)
D&D Character: Demon Queen. Tilly’s girlfriend, acts as her party’s muscle, sarcastic, serious and self-aware. In the real world, Lily is an average, modest teenager who hasn’t quite found her place in the world.

ORCUS (RONNIE)
D&D Character: Red Demon. Former Overlord of the Underworld and current couch potato.  If there’s a lost soul, he’ll either have it or at least know where it is. He’s the comedic relief of the party. In the real world Ronnie is a normal sloppy teenager. Kelly’s older brother.

VERA
D&D Character: The beholder, a ferocious single eyeballed monster with sharp teeth. Agnes’s best friend and coworker. Very down to earth and no nonsense.

EVIL GABBI and EVIL TINA
D&D Characters: Evil Succubus. Tilly’s vision of pure evil; the epitome of fake-nice preppy girl. In the real world, she appears as a normal cheerleader/dancer that tormented Tilly.